LOS ANGELES (DPA) - The drug ketamine has enjoyed a long career as a workhorse anaesthetic. It had a brief career as a party drug known as "Special K".

And just last month, it won recognition from the Food and Drug Administration as a fast-acting antidote for treatment-resistant depression.

But if you thought the drug ketamine was out of surprises, you'd be wrong. In a new account of the bold operation that freed 12 football players and their coach from a watery cave complex in Thailand last July, ketamine is credited with playing a key role in the rescue.

In a letter published on Wednesday (April 3) in The New England Journal of Medicine, the medical professionals responsible for masterminding the safe extraction of the trapped team revealed the evacuees were anaesthetised with ketamine, as they "were swum out of the cave wearing poorly fitting wet suits in cold water".

In addition to keeping the boys from panicking during repeated submersion in murky, turbulent waters, ketamine boasts a property rare among sedatives: It causes blood vessels to constrict rather than relax.

That made it a good choice for the sedation of patients being passed from rescue worker to rescue worker in cold water after a long period of stress, dehydration and lack of food: They were less likely to develop hypothermia.

Known as a "dissociative anaesthetic", ketamine can produce strange out-of-body sensations and blunt fear and pain responses. It can be administered, even to a frantic patient, with an intramuscular injection - a practice anaesthesiologists refer to as a "ketamine dart". 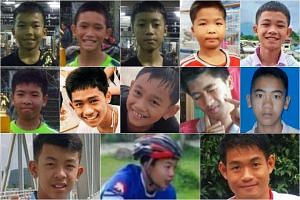 Challenge getting Thai boys, coach out of cave

And unlike "twilight drugs" such as propofol or diazepines - sedatives that experts say were likely considered and rejected for this use - moderate doses of ketamine don't suppress breathing.

That would have been a key consideration for patients far from respiratory monitoring machines or a mechanical ventilator.

"You would get a cooperative boy who would keep breathing spontaneously during the extraction," said Dr John Rivard, an anaesthesiologist in Ann Arbor, Michigan, who has participated in medical missions to Thailand and 14 other countries.

Dr Jeffrey L. Apfelbaum, a University of Chicago anaesthesiologist, was also awed by the medical aspects of the rescue.

"The skill set necessary to get these kids out is just unbelievable," he said. "There are countless ways, both medical and from a diving perspective, where tragedy could have occurred. By no means was any of this straightforward."

None of the 12 teens who played on the Wild Boars football team had any diving experience, and several could not swim. But the boys, along with their coach, had been trapped for at least 15 days. If they didn't run out of oxygen first, impending monsoon rains threatened to drown them.

To escape, one boy at a time would have to be squired through a treacherous maze of passageways filled with murky water of unpredictable depth. A retired Thai Navy Seal had already died while making the crossing, and the physical and mental well-being of the boys were questionable.

The boys would need to breathe on their own, and possibly cooperate with instructions as they were passed from rescuer to rescuer. And they could not panic, since each step of the relay was planned with military precision.

Writing in The New England Journal of Medicine, the emergency medical team that planned the boys' escape revealed that rescuers administered "unspecified doses" of "ketamine-based anaesthesia" to each boy.

Then, they fitted their charges with a "full-face mask" that pushed oxygen-enriched air into the lungs.

Upon their emergence from the Tham Luang cave complex on July 8, the first four evacuees had their full-face masks replaced with oxygen masks that fit more loosely. They were also fitted with sunglasses to protect eyes that had not been exposed to the sun in more than two weeks.

Each patient's head and neck were immobilised, in the event that some spinal trauma had occurred, then his wet suit was removed. Finally, the patients were bundled in blankets to ward off hypothermia.

Despite the precautions, the second patient to emerge from the cave complex developed hypothermia as he was being transported via helicopter from the field hospital to Chiangrai Prachanukroh Hospital.

If a patient's core temperature is not raised - usually with an infusion of warmed saline fluid and a generous supply of warmed blankets - heart and respiratory failure can lead to death.

The hypothermic boy's core temperature fell to 34.5 deg C, a problem attributed to "insufficient team coordination", according to the medical journal report. After that, an anaesthesiologist was assigned to measure evacuees' core temperature repeatedly once they emerged from the caves.

Dr Richard Harris, an Australian anaesthetist who contributed to the report, said he taught the divers performing the rescue how to administer ketamine to the boys, "and to readminister the sedative when the time was right".

After a July ceremony in which he was honoured for his role in the rescues, Dr Harris told reporters that all of the rescued children "needed re-sedation at different times on the way out".

As a result, anaesthesiologists surmised that the boys' level of consciousness likely varied in the course of their journeys out of the cave.

But while several American anaesthesiologists lauded the team's decision to use ketamine, some acknowledged that the sedative's MacGyver-esque use posed a few risks that were, thankfully, not realised.

Dr Jeffrey B. Gross, chairman of the University of Connecticut's department of anaesthesiology, said that light sedation with ketamine will "basically scramble your brain a bit but won't put it to sleep".

At some points, the boys may have been able to follow simple directions. But their ability to perform complex manoeuvres, such as swimming, would be doubtful, he said.

At a larger dose, Dr Gross added, "they'd give you a blank stare. The lights are on but nobody's home".

Dr Apfelbaum said he believes that many of the boys may have been deeply sedated for the most perilous stretches of the journey. That would have rendered their bodies virtually lifeless, unable to move or thrash about if they panicked, but still able to breathe and to be handed from rescuer to rescuer.

For somewhere between 5 per cent and 30 per cent of patients - and for teens especially - ketamine can induce frightening hallucinations, Dr Gross said. And while respiratory suppression is uncommon at moderate doses, "at higher doses, they may lose consciousness and may stop breathing".

"I always make sure we have a breathing bag and oxygen if I give a large dose," Dr Gross said. "I'd be scared to death I'd have to breathe for them if I gave them anything but a lowish dose."