KUALA LUMPUR (AFP) - The body of an assassinated Palestinian scientist was on Wednesday (April 25) driven through the Malaysian capital accompanied by a crowd shouting "God is greatest", as mourners accused Israel of killing him.

Fadi Mohammad al-Batsh's corpse was set to be flown to Egypt later in the day before being transported on to Gaza for burial.

Batsh, a member of Islamist militant group Hamas and said to be a rocket-making expert, was murdered in a hail of bullets by motorbike-riding attackers last Saturday as he walked to a Kuala Lumpur mosque for dawn prayers.

Family and friends of the 35-year-old have accused Israel's Mossad spy agency of carrying out the killing but the Jewish state has denied the claims.

Hundreds of mourners marched through the capital under Palestinian flags accompanying a van holding the body, as they carried placards showing the victim's face and chanting "God is greatest".

The remains were taken to a mosque, where prayers for the dead were performed before about 500 mourners.

"Every Palestinian who has heard of this assassination is saddened and shocked," Muslim Imran, chairman of the Palestinian Cultural Organisation of Malaysia, told the crowd. 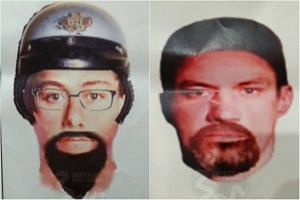 Malaysia carries out autopsy on Palestinian gunned down in 'Mossad' hit

"This crime, I believe, is another reflection of the nature of the Israeli occupation. They carry out crimes, massacres, not only in Palestine but also in the rest of the world."

Earlier on Wednesday police said they believed the two suspects accused of carrying out the hit were still in the country, and released a photograph of one of them.

The men were believed to have entered Malaysia in January but their nationalities were still not known, police said.

The motorbike they were allegedly riding was found abandoned Tuesday not far from where the assassination took place, and police were able to trace the photo.

Mossad is believed to have assassinated Palestinian militants and scientists in the past, but rarely confirms such operations.

Batsh's expertise in making weapons could have made him a target - militants in Hamas-ruled Gaza regularly fire rockets at southern Israel, usually without causing casualties.

But Israeli Defence Minister Avigdor Lieberman has denied claims of the Jewish state's involvement, suggesting instead that it was a "settling of accounts" between factions of a terror group.