JAKARTA (REUTERS) - A Boeing 737 Max 8 operated by Indonesia's Lion Air with 189 people on board crashed into the sea on Monday (Oct 29) soon after taking off from the capital, Jakarta, on a flight to a tin-mining region, officials said.

Flight JT610 lost contact with ground officials 13 minutes after take-off. It has sunk in waters about 30m to 35m deep, about 15km north of the coast of Java island.

Here are some details on what investigators will be looking for, and on the airline and the aircraft.

The top priority for investigators will be finding the cockpit voice recorder and flight data recorder to help determine the cause, safety experts said.

The pilots had asked to turn back to base shortly before losing contact with air traffic control, according to a spokesman for Indonesia's air navigation authorities.

Data from flight tracking service FlightRadar24 shows that the first sign something was amiss came about two minutes into the flight when the plane had reached 2,000 feet.

At that point, it descended more than 500 feet and veered to the left before climbing again to 5,000 feet, where it stayed during most of the rest of the flight. 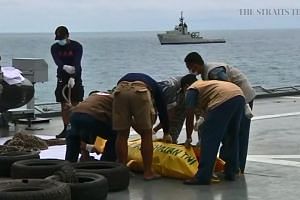 Lion Air crash: Search and rescue efforts under way for sunken plane with 189 people on board

It began gaining speed in the final moments and reached 638kmh before data was lost when it was at 3,650 feet.

Given the plane crashed in relatively shallow water, recovering the black boxes should be easier than with deepwater crashes like AirAsia Indonesia flight QZ8501 in 2014 and Air France flight 447 in 2009, Flightglobal Asia managing editor Greg Waldron said.

Privately owned budget carrier Lion Air was founded in 1999 and its only fatal accident to date was when an MD-82 crashed upon landing at Solo City in 2004, killing 25 of the 163 people on board, according to the Flight Safety Foundation's Aviation Safety Network.

However, six other Lion Air jets, including one that crash-landed in the water short of the runway at Bali in 2013, were damaged beyond repair in various accidents, according to the Aviation Safety Network.

Lion Air was removed from the European Union's air safety blacklist in June 2016.

Indonesia overall has had a "chequered past" in terms of air safety, including hull losses like those experienced by Lion Air, and there is room for improvement, said Mr Shukor Yusof, the head of aviation consultancy Endau Analytics.

"Indonesia needs help," he said. "Many factors have to be looked into, including the air traffic management system, maintenance, training and so on, to cope with a rapid increase in the number of planes and passengers each year."

Lion Air flight JT610 is the world's first crash of a Boeing 737 Max, a more fuel-efficient version of the workhorse single-aisle jet that was introduced into commercial service last year.

Boeing has received 4,783 orders for the 737 Max, of which 219 had been delivered by the end of September, according to its order book.

Southwest Airlines has received 23, making it the biggest operator of the type to date, followed by Air Canada with 18, American Airlines Group with 15 and Lion Air with 13, Boeing data shows.

Lion Air, via its Malaysian subsidiary Malindo Air, was the first carrier globally to take delivery of the 737 Max last year.

The jet that crashed on Monday was delivered in August and had 800 hours of flying time, Lion Air said.

Lion Air is one of the US planemaker's largest customers globally.