PUTRAJAYA (THE STAR/ASIA NEWS NETWORK) - The chairman of electoral reform group Bersih has insisted that a two-day rally will proceed as planned on Saturday (Aug 29) despite being declared illegal by the authorities.

Maria Chin Abdullah said the organisers would meet the police on Wednesday (Aug 26) following a statement by Home Ministry Secretary-General Alwi Ibrahim that Bersih is not a registered organisation.

The High Court declared Bersih a lawful society in 2012.

The group has in recent weeks urged Prime Minister Najib Razak to step down amid a political funding controversy. Between 2007 and 2012, the opposition-backed coalition of NGOs thrice led massive street protests in the capital. 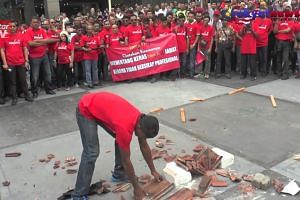 The Bar Council's Human Rights Committee said there was no such thing as an illegal rally anymore.

Its co-chair Andrew Khoo said: "The courts have taken a dim view of taking action against a person exercising his or her constitutional right to peaceful assembly.

"However, with the new Section 124B of the Penal Code, attending a rally could be deemed an activity detrimental to parliamentary democracy.

"This is untested legislation and the legal environment today is different from that in 2012" when Bersih 3 took place, he added.

Lawyer Amer Hamzah Arshad said each person had the right to assemble peacefully.

He said the Court of Appeal decision in opposition PKR lawmaker Nik Nazmi Nik Ahmad's case over the Black 505 rally was still applicable.

On April 25 last year, the Court of Appeal acquitted Nik Nazmi, the Seri Setia assemblyman, ruling that his prosecution under Section 9(5) of the Peaceful Assembly Act (PAA) was null and void.

The court held that Section 9(5) - which criminalises the failure to give a 10-day notice before a gathering - was unconstitutional because it criminalised the fundamental right to gather.

Amer Hamzah urged the police to concentrate instead on those who may try to sabotage the assembly or create trouble.

"These groups should be stopped because they may want to subvert the objective of the rally."

Malaysian Bar president Steven Thiru criticised the police decision to disallow Bersih 4, stating that the right to assemble peacefully was provided for in Article 10(1)(b) of the Federal Constitution.

He said Section 27 of the Police Act 1967 required a police permit for assemblies but that provision was repealed in 2012.

He pointed out that the PAA had no requirement for a police permit for an assembly.