JAKARTA -   A radio station in Batam accused of airing radical Islamic teachings has been cleared by the Indonesian Broadcasting Commission (KPI).

This comes after a review by the regional unit of the KPI found that Radio Hang FM no longer promotes “violent Islam” in its broadcast, which regularly includes dakwahs, or religious teachings.

"The content of their broadcast has changed substantially, it is more open now,” said Mr Azwardi Anas, who chairs the Riau Islands unit of the commission, on Friday (Nov 3).

Radio Hang FM came under the scrutiny of Singapore authorities after two of its avid listeners, Singaporeans Rosli Hamzah and Mohamed Omar Mahadi, were detained under the Internal Security Act in August last year.

Both Rosli and Omar, then 50 and 33 respectively, were planning to travel to the Middle East to fight for the Islamic State in Iraq and Syria (ISIS).

Rosli, who worked as a car washer, began listening to Radio Hang FM in 2009 and was introduced to ISIS propaganda material through social media in 2014, while Omar started tuning in sometime in 2010.

The latter, who worked as a waste truck driver, had made plans to travel to Syria with his wife Dian Faezah, then 34. His wife has also been arrested and has since been placed on a Restriction Order.

Singapore's Ministry of Home Affairs had said that Radio Hang FM “is a religious station which sometimes features speakers who preach extreme views”, and authorities were looking at options to block the station.

The KPI had launched an investigation of the station following news of the arrests in Singapore and allegations that Radio Hang FM promoted radical teachings through its broadcast.

The radio station’s previous line-up of preachers with extreme views had attracted many followers, who over time became receptive to radical ideology championed by groups such as ISIS. 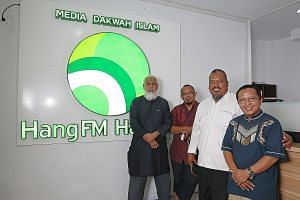 Community leaders and analysts in Singapore have said that the case of Rosli and Omar, highlighted the danger of exclusivist teachings like those spread by Radio Hang FM, in priming individuals for ISIS propaganda.

While these teachings may not directly encourage violence, they ask believers to stay apart from non-Muslims and Muslims who don’t share their views, and this is a slippery slope, they added.

Mr Azwardi said that the station was put through an evaluation process and in April was found to “consistently oppose acts of terrorism through its broadcasts and off-air activities”.

According to The Jakarta Post, the radio station had held an off-air forum in August this year, with the theme of "Developing Indonesia without Radicalism". The discussion was led by members of the Indonesian National Police, the Indonesian Ulema Council and the KPI.

“So there is no longer a problem of ISIS, as accused by Singapore,” said Mr Azwardi. “The proof is in our government issuing (Radio Hang FM) a permit, which is fixed for the next five years.”

Radio Hang FM founder Zein Alatas said his station has been visited by “intelligence officers” in the wake of accusations that the station aired ISIS propaganda.

“We talked about the radio station, what it is about, nothing was hidden,” he said.

This is not the first time the station has attracted controversy. In 2013, a group of Muslim residents in Batam staged a protest against the station’s airing of extreme religious sermons.

Mr Zein said that the station has since banned controversial hardline clerics and remains committed to the eradication of radicalism in Indonesia.