PETALING JAYA (THE STAR/ASIA NEWS NETWORK) - The signs were there during the two weeks of campaigning that the opposition Barisan Nasional (BN) would win the Tanjung Piai by-election on Saturday (Nov 16).

The crowd attendance at some of the rallies for the ruling Pakatan Harapan (PH) alliance with top leaders like Democratic Action Party (DAP) adviser Lim Kit Siang was in the double-digits. The near-empty events were a reversal of fortunes for PH which attracted huge crowds in last year's election.

In contrast, the turnout at BN's rallies was high in the by-election.

The contrasting number of people at the PH and BN events was an indication that the voters in the parliamentary seat in Johor wanted to teach the government a lesson.

A majority of them were angry or disappointed that the ruling coalition had failed to fulfil most of its election promises. They also wanted to protest against the government's failure to control the rising cost of living.

"The biggest factor which helped BN to win in Tanjung Piai is PH itself. They failed to deliver their promises at the federal and state level. Voters realised that PH is only good at making empty promises," said Universiti Malaya political analyst Muhammad Asri Mohd Ali.

"Now, PH has to pay the price. Voters are not willing to be duped and conned by PH any more," he said.

The Tanjung Piai victory is a huge morale boost for the Malaysian Chinese Association (MCA) which fielded Datuk Seri Wee Jeck Seng as the BN candidate. It will now have two MPs.

The win is a turning point for the party which was at its lowest ebb when only Datuk Seri Wee Ka Siong won a parliamentary seat in the election last year.

It is also a boost for the party, as it secured a higher number of Chinese votes compared to the last election.

Sizeable Chinese voters were upset with the rising cost of living, the lack of direction in running the country, the ringgit's decline and the drop in the price of palm oil.

They were also angry with the government for not fulfilling its promise to recognise the Unified Examination Certificate (UEC) - the school leaving certificate of the Malaysian Independent Chinese secondary schools - as stated in Pakatan's election manifesto, and the cutback on government funding for the MCA-linked Tunku Abdul Rahman University College.

The BN win, according to Professor James Chin, director of the Asia Institute at the University of Tasmania, showed that the Chinese wanted to send a strong signal to DAP on the way PH was operating.

"It is not a signal to PH but to DAP. The Chinese are unhappy with DAP's dealings inside Pakatan. They feel that DAP can't deliver any of the promises it made to the Chinese community," he said.

"They want the DAP to be more assertive on Chinese issues like UEC and ICERD (International Convention on the Elimination of All Forms of Racial Discrimination) and khat," said Prof Chin. The PH government had refused to ratify the United Nations human rights treaty last year after facing resistance from Malay and Muslim organisations, and had introduced khat, or Arabic script, in the Malay language syllabus for primary schools in August.

Dr Muhammad Asri said the non-Malays were also frustrated with DAP's attitude towards alliance member Parti Pribumi Bersatu Malaysia when the latter accepted defected MPs from BN's Umno and behaved like Umno of the past.

Dr Wee Jeck Seng, the two-term Tanjung Piai MP who lost narrowly last year, is a popular candidate with a track record of serving his constituents.

The Muafakat Nasional - the unity pact between Parti Islam SeMalaysia (PAS) and Umno - also helped BN to win over the Malay voters.

"For the majority of Malay voters in Tanjung Piai, they see that the economy is still not being handled well. Their lives have not changed. In particular their income, even though the government has changed," said Universiti Malaya (UM) sociopolitics professor Awang Azman Awang Pawi.

Prof Awang Azman said while anger over issues such as the 1Malaysia Development Berhad scandal and the unpopular goods and services tax (GST) had played a part in turning Malay voters away from the BN, those issues were no longer major concerns for the Malays.

"For the Malays, they still want the BN because BN has long been credited to them. They were angry with issues such as 1MDB and GST. But these issues are no longer relevant, and it appears that Bersatu is not able to take over Umno's role."

It is interesting to note that many of the Chinese voters did not have issues with Muafakat Nasional. It is not a surprise, as the community was comfortable with voting for a former PAS candidate from Pakatan Rakyat - the predecessor of the current PH alliance - in the 2013 election.

"It is a big victory for Muafakat Nasional as the combination of PAS and Umno votes can give it a higher number of Malay votes. And the formula of fielding an MCA candidate who is suitable and qualified paid off," said Prof Awang Azman.

The defeat in Tanjung Piai is a wake-up call for Pakatan. The Ubah (change) voters are sending a strong message that they are disgruntled with its performance in the last 555 days.

The result is also a signal to Prime Minister Mahathir Mohamad that a significant number of the voters who were calling for change wanted a clear-cut plan on the transfer of power to Parti Keadilan Rakyat president Anwar Ibrahim, as set out under the Pakatan agreement before last year's election.

"The acceptance of Mahathir's leadership has deteriorated, as there is a stronger demand for Mahathir to hand over power to Anwar quickly, " said Prof Awang Azman. 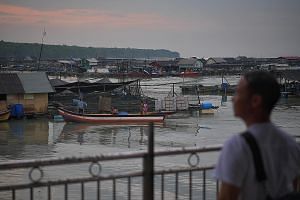 It is the second defeat for Tun Dr Mahathir's Bersatu. It also failed to retain the Semenyih state seat in Selangor in a by-election in February.

Prof Awang Azman warned that the Tanjung Piai result might only be temporary.

"These dynamics can change over time and circumstances," he said.

But BN's four wins in the last five by-elections indicate that the PH might be a one-term government.