A Vietnamese baby girl who was treated at a Singapore hospital after being left for dead in Vietnam in March has died.

Three-month old Trieu Hoai An died at about 4am on Friday (July 12) at the Hue Quang monastery in Da Lat City, about 300km north-east of Ho Chi Minh City.

In a Facebook post on Friday, her primary caregiver Venerable Minh Tai said that Hoai An woke up crying at about 3am, but managed to fall back asleep after being fed some milk by the nun who was caring for her.

At around 4am, when the nun checked on her again, she had stopped breathing.

At just a few days old, she was found in a plastic bag hanging from a tree in a Vietnamese coffee plantation by a farmer who heard her crying.

She was sunburnt and had numerous insect bites. She also had a festering wound in her badly swollen head and squirming maggots were found in her eyes and nose.

Doctors at a local hospital said there was little they could do and gave her less than a year to live.

With no known family, she was adopted by the Venerable Minh Tai of the Hue Quang temple near Da Lat. 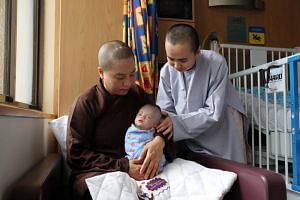 Her heart-wrenching story came to light after she was taken to Singapore's Mount Elizabeth Hospital for treatment on April 10, thanks to donations from people all over Vietnam.

Doctors in Singapore diagnosed her with hydrocephalus, a rare condition that includes the swelling of the head. She was about three weeks old then.

At the hospital here, she made quick progress in her recovery and was able to return to Da Lat on June 25.

However, doctors had said that she was not out of danger yet, as there was a possibility she could have a more serious condition.

On Saturday, a hospital spokesman said that baby Hoai An's care team was saddened to learn of her death.

"She was a spirited baby who fought bravely despite her condition. We would like to extend our condolences to Venerable Minh Tai and her caretakers," the spokesman said. "May Hoai An rest in peace."