MANILA (AFP) - An Australian nun who battled a government bid to expel her from the Philippines after she angered President Rodrigo Duterte, said on Wednesday (Oct 31) she will leave rather than face certain arrest and deportation.

Fox, who has spent nearly three decades advocating for the Philippines' poorest, has become a symbol of understated resistance during her seven-month administrative fight to stay.

But with her legal options all but exhausted, the soft-spoken nun decided to return to Australia rather than take the risk of being removed forcibly.

"I've been given an ultimatum that if I don't leave by 3 November, they will send people to chase me," she told AFP. "There is no point being arrested and deported and I don't have any choice."

Her supporters condemned the denial and pledged to keep up their legal battle to allow her to return.

"We will not allow the government to forcibly expel Sr. Fox," the National Union of People's Lawyers said in a statement. "Our fight is not yet over."

She apparently angered the President by joining a fact-finding mission in April to investigate alleged abuses against farmers, including killings and evictions by soldiers fighting guerrillas in the southern Philippines. 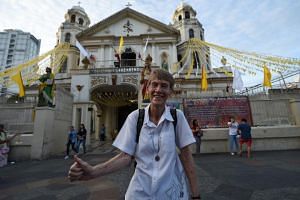 In Duterte's home town of Davao, Fox went to see farmers detained on charges of possessing explosives, and attended a press conference by workers who were fired after demanding better wages and conditions.

Shortly after that she was arrested briefly on charges of violating her visa's terms against activism and the slow turning wheels of the Philippine bureaucracy began moving to strip her of her papers.

It coincided with a crackdown by Duterte against foreigners whom he accuses of meddling in his nation's affairs.

Four months later Australian rights activist Gill Boehringer, 84, was barred entry for having attended a protest in 2015, allegedly in violation of immigration laws.

Duterte accused Fox of "disorderly conduct" and said: "Don't let her in because that nun has a shameless mouth".

She landed in the Philippines in 1990 as a member of the Sisters of Our Lady of Sion, a congregation of nuns founded in France in 1847 and famed for harbouring Jews fleeing from Nazi persecution in World War II.

A former practising lawyer who worked with indigent clients in Australia, Fox has said she has been educating landless Filipino farm hands and factory workers about their rights.

Justice Secretary Menardo Guevarra told AFP that Fox has to leave the Philippines because her visa will expire, even though the deportation case against her is not resolved.

"If Sister Fox eventually wins, her name will be removed from the immigration blacklist and she may return to the Philippines," he said.

Fox imagines a slightly different scenario under which she will make her way back to Manila.

"Maybe when Duterte is not there anymore," she said, referring to the 2022 end of his term.