Political heavyweight Anwar Ibrahim, who was imprisoned under the Najib Razak administration until the former prime minister's shock defeat in May elections, has slammed Canberra's "tainted" policy towards the former government.

Anwar cited the case of a policeman, now in Australian custody, who fled Malaysia in 2015 after being sentenced to hang for the killing of a Mongolian woman linked to a bribery scandal involving Najib's government.

Anwar, who was released from jail after Najib's defeat and is now presumptive successor to 93-year-old Prime Minister Mahathir Mohamad, has called for the policeman to be sent home to face a new trial.

During a visit to Malaysia, Foreign Minister Julie Bishop said Australia had not received an extradition request for the officer, Sirul Azhar Umar.

Asked about Anwar's comments, she said Canberra in the past had simply "worked with the government of Malaysia of the day".

"In the past 61 years it has been the same government," said Bishop, following talks with Wan Azizah Wan Ismail, Anwar's wife and now Deputy Prime Minister. 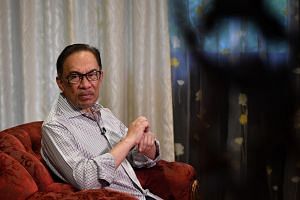 Australia's policy of not extraditing people to countries where they may face the death penalty is seen as a barrier to getting Sirul sent back to Malaysia.

Mahathir has said that Sirul's death sentence may be commuted to allow his return to Malaysia.

The policeman maintains he was ordered by "important people" to murder the Mongolian woman, Altantuya Shaariibuu, in 2006.

Altantuya was killed and her body blown up with military-grade explosives.

Her murder was the most shocking aspect of a scandal involving allegations that an associate of Najib arranged huge kickbacks for the purchase of French submarines in 2002.

Anwar, who was a leading member of the opposition when Najib was in power, was jailed in 2015 on sodomy charges that critics say were politically motivated.

Since his election defeat, Najib has been arrested and charged over a scandal at state fund 1Malaysia Development Berhad.