YANGON (REUTERS) - Aung San Suu Kyi will appear before the International Court of Justice (ICJ) to contest a case filed by Gambia accusing Myanmar of genocide against its Rohingya Muslim minority, her government said on Wednesday (Nov 20).

More than 730,000 Rohingya Muslims have fled to neighbouring Bangladesh since a 2017 crackdown by Myanmar's military, which UN investigators say was carried out with "genocidal intent".

Gambia, a tiny, mainly Muslim West African nation, lodged its lawsuit after winning the support of the Organisation for Islamic Cooperation (OIC), which has 57 member states. Only a state can file a case against another state at the ICJ.

"Myanmar has retained prominent international lawyers to contest the case submitted by Gambia," the ministry for state counsellor Suu Kyi's office said in a Facebook post.

"The State Counsellor, in her capacity as Union Minister for Foreign Affairs, will lead a team to the Hague, Netherlands, to defend the national interest of Myanmar at the ICJ," it said, giving no further details.

Military spokesman Brigadier General Zaw Min Tun told Reuters the decision was made after the army consulted with the government.

A spokesman for Suu Kyi's party, the National League for Democracy, said she had decided to take on the case herself. 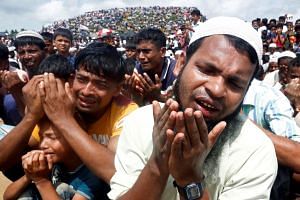 "And they accused that she didn't try to stop human rights violations. She decided to face that lawsuit by herself."

Both Gambia and Myanmar are signatories to the 1948 Genocide Convention, which not only prohibits states from committing genocide but also compels all signatory states to prevent and punish the crime of genocide.

The ICJ has said it will hold the first public hearings in the case on Dec 10 to 12. The court has no means to enforce any of its rulings.