KUALA LUMPUR (THE STAR/ASIA NEWS NETWORK) - A former chief secretary to the Malaysian government was in the hot seat on Monday (July 27) in a trial involving audit report tampering, as he was questioned over the presence of a senior officer from former premier Najib Razak's office in a meeting to discuss a 1MDB audit report.

As chief secretary to the government at the time, Tan Sri Ali Hamsa was the most senior official in government.

He was cross-examined why he did not stop Tan Sri Shukry Mohd Salleh, Najib's former principal private secretary, from speaking up in the audit meeting on Feb 24,2016.

The trial is separate from the one where Najib was on Tuesday (July 28) found guilty of all seven charges related to SRC International, a former subsidiary of 1MDB.

In this separate trial, Najib is accused of using his position to order amendments to the 1MDB final audit report before it was tabled to the Public Accounts Committee (PAC) to avoid any action against him.

The PAC is a bipartisan parliamentary committee that was looking into the affairs of 1MDB.

Najib allegedly committed the offence in Putrajaya between Feb 22 and 26,2016.

The court had earlier heard testimonies that four issues were agreed to be omitted from the audit report. These included the issue of there being two conflicting 1MDB financial statements, and the presence of fugitive businessman Low Taek Jho at a 1MDB meeting.

'HE WAS FROM THE PMO'

Mr Ali, when asked by Arul Kanda's lawyer, Datuk N. Sivananthan, why Mr Shukry was allowed to speak up in a meeting on the 1MDB audit, answered it was because Mr Shukry "was from the Prime Minister's Office (PMO)". 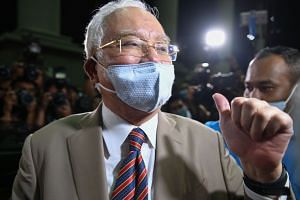 Malaysia's mega 1MDB scandal that brought down a prime minister; Najib to face verdict on July 28

Mr Sivananthan questioned why Mr Shukry - who was not an auditor nor an audited person - had a say in the meeting to discuss the 1MDB audit, especially on the discovery of two conflicting versions of the sovereign state fund's financial statement.

Mr Shukry had earlier called a meeting with Mr Ali and then auditor-general Ambrin Buang to discuss the audit report at the PMO on Feb 22,2016.

Two days later, on Feb 24, Mr Ali called a meeting with 1MDB and other relevant agencies to discuss amendments to the report and Mr Shukry was also present.

Mr Sivananthan: Why did Shukri comment about the two statements when he has nothing to do with 1MDB?

Mr Sivananthan: Why did you allow him to make comments when he has no business with the audit?

Mr Ali: He was from the PMO.

Mr Sivananthan: Does this give him the right to give comments? What were his interests? Why was he allowed to comment?

Mr Ali: I have no answer.

Mr Sivananthan: You allowed him to speak. You did not stop him.

Mr Ali: I did not stop him.

Mr Ali told the court the meeting could discuss and suggest what was needed to be removed from the audit report but essentially it was up to Tan Sri Ambrin, as the auditor-general, to decide.

Najib and Arul Kanda were charged under Section 23(1) of the MACC Act 2009, which provides a jail term of up to 20 years and a fine of no less than five times the amount of gratification or RM10,000 (S$3,245), whichever is higher, upon conviction.