Asean ministers will discuss a Code of Conduct (COC) for the South China Sea next week amid concerns of China's increasing militarisation in the area, Malaysian Foreign Minister Saifuddin Abdullah said on Wednesday (July 25).

He said the Declaration of Conduct that was signed in 2002 by China and Asean does not appear to have "teeth".

The construction of military bases and the deployment of military assets by China on its man-made islands in the South China Sea have created unease among Asean countries, he told Parliament in response to several questions on Malaysia's stance towards China's moves and measures to protect the nation's sovereignty.

China has constructed several artificial islands near the Spratly Islands and equipped them with airstrips and missile stations, among others.

The United States had several time sent warships to the area as part of "freedom of navigation" exercises.

Malaysia's Prime Minister Mahathir Mohamad has said that warships should not be allowed to pass through the South China Sea.

"All parties need to avoid actions that can create tensions and are provocative, practice self restraint and avoid military actions," said Mr Saifuddin. 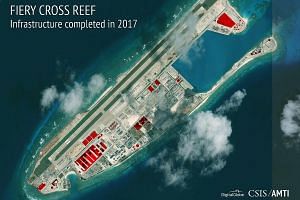 The calm over South China Sea dispute may be short-lived

Along with China, parts of the South China Sea are claimed by Brunei, Malaysia, Taiwan, Vietnam and the Philippines.

The Foreign Minister was also asked if Malaysia would file an application to the International Court of Justice (ICJ) to claim ownership of the country's Layang Layang island, located near the Spratly islands, which is among a group of 600 islands and reefs claimed by several countries.

Mr Saifuddin replied that Malaysia's move now was to strengthen ways in which to "control China's behaviour in the area", by setting up the COC as soon as possible.

The COC is on the table at the Asean Foreign Ministers' meeting in Singapore next week, he said, adding that the DOC signed in 2002 "appeared to have no teeth".

"I am not saying the COC will have fangs but we will try to resolve it through this process and if once we have the COC, (China) is still aggressive, we may have to" file a claim to the ICJ on Layang Layang island.

The Asean member-nations and China in May completed a draft framework for the COC.

"We will not compromise on matters which can jeopardise the country's sovereignty," he said.

In 1996, during the 29th Asean Ministerial Meeting in Jakarta, regional members called for a legally binding COC in the South China Sea that will "lay the foundation for long-term stability in the area and foster understanding among claimant countries".

In 2002, China and Asean signed the Declaration on the Conduct of Parties (DOC) in the South China Sea, a declaratory prelude to a legally binding final agreement.

Among other things, the non-binding DOC discourages signatories from aggressive actions and bars construction of new structures in the contested region that could spark armed conflicts.