VIENTIANE - Asean leaders should work together to fight Zika, while also putting the disease in the proper context for its people, Prime Minister Lee Hsien Loong said on Tuesday (Sept 6) as he addressed his Asean counterparts.

At the 28th Asean Summit, Mr Lee affirmed Singapore's willingness to work with Asean countries and the international community to combat Zika.

"Since the recent detection of locally transmitted cases in Singapore, we have undertaken necessary immediate measures, for example stepping up testing, intensifying mosquito control, expanding public education, and advising on extra precautions for pregnant women, and our efforts have been affirmed by the World Health Organisation ," he said.

He also urged regional leaders to prepare for a prolonged fight against Zika.

"We should prepare ourselves for a possibly extended campaign against Zika while ensuring that the region remains open and connected for business and trade." 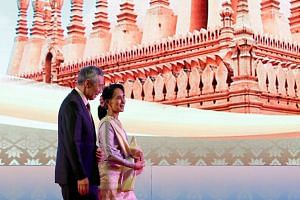 In Pictures: Leaders from the region and beyond in Laos for Asean, East Asia summits

For this to happen, governments have to actively combat the disease, while at the same time communicating the real risks posed by Zika.

"For many people, it is generally a mild disease, but for pregnant mothers-to-be, there is special concern because of the possible impact on unborn babies," he said.

Besides Zika, Mr Lee also urged fellow Asean leaders to push forward in addressing other transboundary issues "which affect our peoples in many countries", such as the annual haze.

He noted that all 10 member states have ratified the Asean Agreement on Transboundary Haze Pollution and adopted a roadmap aiming for a haze-free Asean by 2020.

The next step is to fully operationalise the Asean haze monitoring system and the Asean Coordinating Centre for Transboundary Haze Pollution Control, he said.

"These are areas we can work on improving the Asean community. If we focus on them, and stay united, I believe we can overcome our challenges and prosper together."