BANGKOK - Prime Minister Lee Hsien Loong will travel to Thailand on Saturday (Nov 2) to attend the Asean summit and related meetings starting this weekend, as bleak economic conditions press negotiators to seal what could be the world's largest free trade pact.

Talks among the 16 parties to the Regional Comprehensive Economic Partnership (RCEP) will be closely watched, as leaders of the 10 Asean member states meet for their twice-yearly summit and also hold discussions with key partners like China, Japan, India and the United States.

The American presence, however, has been downgraded this time, with US President Donald Trump sending as his special envoy National Security Adviser Robert O'Brien. He will be joined by Secretary of Commerce Wilbur Ross, who is scheduled to make a keynote speech at a business forum to be held on the sidelines of the Asean meetings on Monday.

In a press statement issued on Friday evening, the Prime Minister's Office in Singapore said: "The Asean leaders will discuss ways to incorporate sustainability in Asean's community-building efforts, reinforce Asean centrality and unity, and promote regional peace and stability."

Mr Lee will be accompanied by Foreign Minister Vivian Balakrishnan and Minister for Trade and Industry Chan Chun Sing, as well as officials from both ministries.

The US choice of representatives is widely perceived as a snub, given that the summit will be attended by prime ministers like Mr Narendra Modi from India, Mr Li Keqiang from China, Mr Shinzo Abe from Japan and Mr Dmitry Medvedev from Russia.

Dr Tang Siew Mun, who heads the Asean Studies Centre at ISEAS-Yusof Ishak Institute, called the US representation damaging to its "Free and Open Indo-Pacific Strategy", a vision often interpreted as a counterweight to China's growing influence.

While it may be unfair to judge the US' regional profile by one event, "the fact that the US will be represented at a lower level sets the precedent for future downgrading", Dr Tang said.

"South-east Asians tend to have a long memory and the Trump administration's poor record of attendance at the East Asia Summit will linger in their minds as they evaluate future partnerships with the US." 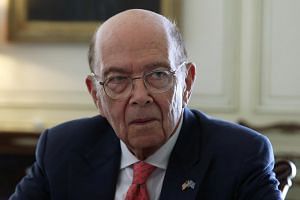 US set to disappoint Asia with downgraded delegation for Bangkok summits

Asean outlook on the Indo-Pacific - time for action

"The region will also ponder the US seriousness in not ceding strategic ground to China. How does the US expect the region to take its proclamations to compete with China in stride when it cannot be counted on to even show up for a diplomatic meeting?" he added.

Philippine presidential communications secretary Martin Andanar tried to play down the slight when he spoke to journalists in Bangkok on Thursday evening.

Still, Asean leaders will be watching what Mr Ross says for clues on future American direction, given the US-China trade war and Mr Trump's zeal to narrow trade deficits with the US' trading partners.

"Will he be a harbinger of imminent punitive measures on Asean member states who are on the US' currency manipulator watch list, which includes Vietnam, Malaysia and Singapore?" asked Dr Tang.

Many analysts do not expect an immediate conclusion of the RCEP deal, which involves the Asean member states as well as China, India, Australia, New Zealand, Japan and South Korea.

Negotiations have been taking place since 2013, but slowed by stiff resistance within India over fears of being flooded with cheap Chinese goods.

According to Thailand's Deputy Prime Minister Jurin Laksanawisit, six of the RCEP's 20 chapters remain to be finalised and negotiators are hoping to do so during the latest talks that will end on Monday.