KUALA LUMPUR - Asean countries agreed on contents within its roadmap to control the haze problem in a meeting on Thursday (Aug 11) to discuss the region's next step to combat the perennial issue, but stopped short of exerting more pressure on Indonesia to take serious action against culprits of plantation fires.

"We work together to overcome any problem but we can't bulldoze through... We must respect others' sovereignty," Malaysian minister of natural resources and environment Wan Junaidi Tuanku Jaafar said at a joint press conference with his Asean counterparts at the end of the one-day 12th conference of the parties to the Asean Agreement on Transboundary Haze Pollution (AATHP) in Kuala Lumpur.

The AATHP was established in 2002 as one of the key steps towards eradicating the region's decades-old haze problem by 2020. The agreement was ratified by all member states in January 2015.

Indonesia's environment minister did not attend this year's meeting, and his absence raised questions over the country's seriousness in tackling the problem. 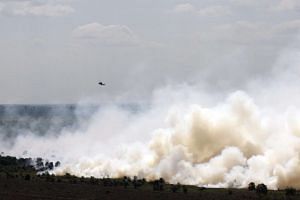 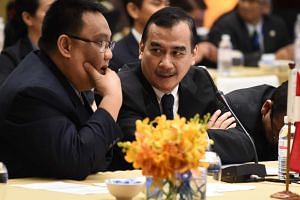 Indonesia's representative Arief Yuwono, a senior adviser to the Ministry of Environment and Forestry, said the country has already taken efforts to address the yearly fires.

"We have also suffered that's why we have initiatives at the policy and local government level," she told reporters.

When pressed over the specific legal actions Indonesia has taken against culpable companies, Mr Arief said there has been "penalties and sanctions more stringent than before" but did not elaborate.

Ministry spokesman Novrizal Tahar told The Straits Times in a text message that Indonesia "greatly appreciates the views and attitudes of neighbour countries" and has been working hard to deal with the problem.

Last year, haze emanating from Indonesia blanketed the country as well as Malaysia and Singapore for more than seven weeks, causing thousands of schools to close in Malaysia and severe repercussions for wildlife in Borneo.

Singapore has served notices to six companies linked to the fires, most commonly caused by palm plantations being set ablaze after harvests.

Two of the companies responded and one director was given a warrant of arrest.

Asean's vision of a haze free region by 2020 may seem like a far fetched goal, but Singapore's Minister for Environment and Water Resources Masagos Zulkifli urged every one to continue to do their part.

"If everyone does what they set out to do, have political will, enforcement of national laws then this would be achieved. This includes consumers playing their part," Mr Masagos told Singapore media.

"We can't be complaining about the haze and then buying the products that are produced in concession areas that caused the haze".

Singapore is committed to work with its Asean neighbours to tackle the problem, Mr Masagos said on his Facebook, and highlighted the Asean Haze Monitoring System (AHMS) as an important initiative.

The system involves using digitised maps and shring information on concession land in forest fire-prone areas. It was adopted by Asean in 2013 but has yet to be implemented.

"Our Asean Leaders have acknowledged the AHMS as a useful tool to assist in monitoring and internal enforcement actions against irresponsible parties contributing to fires. I hope we can operationalise the Asean Haze Monitoring System soon," Mr Masagos wrote.

"We have a duty to our people to protect their health and give them access to clean air. With greater national and regional commitment, we can resolve this decades-long problem by successfully implementing the AATHP."

"Let us not only reflect on the issues, but also focus on solutions and encourage one another in achieving our national plans and targets to eliminate the transboundary haze problem," said Dr Ahmad Zahid.