BANGKOK (THOMSON REUTERS FOUNDATION) - A worsening drought in parts of Thailand has prompted monks and conservationists to appeal to city dwellers to temper traditional New Year celebrations, which are marked by people throwing large quantities of water at one another in the streets.

The dry season is more acute than usual because of the El Nino climate pattern, the meteorological department has said, and more than a quarter of the country's main reservoirs have reported low water levels.

But there is little evidence of it in Bangkok, where shops are hawking large, colourful water guns and buckets ahead of Songkran, which runs from Saturday to next Monday (April 13 to 15).

The annual festival is known as the world's biggest water fight, drawing hundreds of thousands of tourists, mostly to Bangkok and other cities.

"In the rural areas, the suffering is more obvious, and monks include the message of water conservation in their teachings," said Mr Somboon Chungprampree, executive secretary for the International Network of Engaged Buddhists in Bangkok.

"It is harder to deliver the message in the city, especially to well-to-do residents and tourists. Often, it is the poorer farmers who bear the burden of drought," he told the Thomson Reuters Foundation. 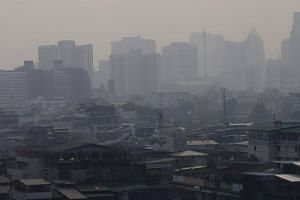 Tourism makes up about 12 per cent of Thailand's economy, and Bangkok was the world's most visited city last year, drawing more than 20 million people.

The call to save water was more urgent in 2016, when Thailand suffered its worst drought in decades.

At the time, the authorities in Bangkok cut the number of Songkran festival days, imposed a curfew for water fights, and appealed to revellers to sprinkle rather than splash.

This year, there has been no official announcement, although festivities in Bangkok will be on a smaller scale because of preparations for the coronation of Thailand's new king.

The popular backpacker district of Khaosan Road, which usually sees a free-for-all water fight, has cancelled celebrations ahead of the ceremonies in May.

But saving some water in Bangkok will not affect levels in reservoirs or help farmers, said Prof Sucharit Koontanakulvong, an associate professor of water resources engineering at Bangkok's Chulalongkorn University.

"Reminding people in Bangkok to use less water because of drought in parts of the country is good and necessary - but it does not have a material impact," he said.

Prof Sucharit has talked to the authorities about creating a colour-coded indicator for water levels across the country, similar to an air quality index.

"That can help create greater awareness of conservation. But there is little interest in such an index," he added.