NEW YORK (BLOOMBERG) - Malaysia's would-be prime minister said he expects to take power from Tun Dr Mahathir Mohamad in less than two years but wants to give the current leader enough time to govern effectively before he assumes control.

"Of course it's not five years because he's made it very clear they would not exceed two years," Datuk Seri Anwar Ibrahim, leader of Parti Keadilan Rakyat, or the People's Justice Party, said in an interview on Wednesday (Feb 13) in New York on Bloomberg Television.

"But it's important to allow him to govern effectively because we are in very difficult and trying times."

Mr Anwar also said Malaysia "will not compromise" in its talks with Goldman Sachs Group on the 1Malaysia Development Berhad (1MDB) scandal, and that the bank "must bear responsibility".

The nation has a responsibility to uncover any crimes the investment bank may have committed, he said, adding that he is not sure whether Malaysia can get the US$7.5 billion (S$10.2 billion) it is seeking from Goldman as compensation for the scandal. Malaysia filed criminal charges against the bank in December.

Dr Mahathir had pledged during last year's election campaign to stand aside for Mr Anwar once he was pardoned for a controversial sodomy conviction, which happened just a week after the opposition's shock victory in May.

The 93-year-old Mahathir then pushed back the timeline to one to two years. Mr Anwar concurred, saying he planned to travel and spend time with his family after more than three years of imprisonment. 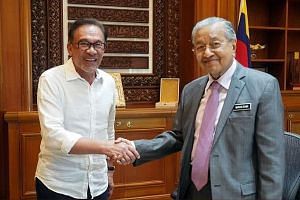 Anwar: Give Mahathir space to lead govt over agreed time

Anwar focusing on party discipline, in no rush to replace Mahathir as PM

The men have presented a united front to the public, giving Dr Mahathir a free hand to root out corruption and get to the bottom of a sprawling scandal over state fund 1MDB before Mr Anwar steps in.

That public stance belies decades of enmity between them: Dr Mahathir fired Mr Anwar as his deputy in 1998 over a dispute on how to respond to the Asian financial crisis. Mr Anwar was later jailed for committing sodomy and abusing power, which he denied, then subsequently imprisoned for another sodomy conviction. He has said that the charges were politically motivated.

Mr Anwar has shown signs of impatience. Despite saying he would spend a year away from politics, he returned to campaign for a Parliament seat just five months after his release.

He was then allowed a seat in the top circle of the ruling Pakatan Harapan's presidential council, while holding no Cabinet position. He also became the chairman of a parliamentary caucus for reform and governance.