"Even if I take over the leadership, Dr Mahathir will still play a role as a statesman who has contributed a lot to the country. Therefore, I do not see any issue in the matter," he told reporters at the National Youth Council 2019 on Wednesday (May 15).

He was asked to comment on his first anniversary after being released from prison on May 16.

Datuk Seri Anwar was released after the Pakatan Harapan coalition swept into power in a shock election victory on May 9 last year.

Prior to GE14, Pakatan component parties agreed that if the coalition won, Tun Dr Mahathir would be the PM for two years before handing over the reins to Mr Anwar.

Mr Anwar explained that he welcomed Dr Mahathir's commitment and explanation over the succession plan but refused to give any details. 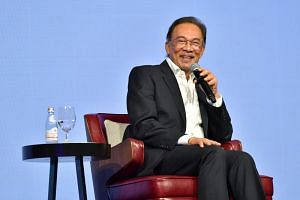 Changing old policies not easy, but Pakatan Harapan must be confident: Anwar Ibrahim

When will Mahathir hand over to Anwar?

"I welcome it, and regarding the dates and others, let it be discussed between me and him in a good manner.

"I have no problem at all, as Dr Mahathir has a role and must be given space," he said.

Asked how he felt after one year of his release, Mr Anwar, who is also Port Dickson MP said: "Oh, it has been a year! I am grateful for the release and a year has passed by.

"I am utilising my time to meet everyone at all stages from the district to those overseas and even meet my old friends and grassroots leaders, activists and non-governmental organisations," he said.

On a separate matter, he welcomed the Prime Minister's suggestions for all federal lawmakers to declare their assets and those of their family to the Malaysian Anti-Corruption Commission (MACC).

"The proposal must be accepted by the government, as the government has the responsibility to be transparent, and the Opposition also raised it before.

"We must give our full support," said Mr Anwar.

On the suggestion to allow Cabinet ministers and politicians with government posts to campaign during working hours, Mr Anwar said there should be a set procedure deemed to be fair to ministers.

"If you really open it totally then the ministers can just virtually spend all the time campaigning, which is also bad.

"If they want to do that, they should take leave. However, if they do it as part of a programme, then probably it is acceptable.

"We need to discuss with the Election Commission (EC) and all the relevant stakeholders," he added.

Electoral watchdog Bersih 2.0 in a statement on Wednesday urged the EC to stand firm in restricting election campaigning by ministers, even though the Prime Minister called for a relaxation on such guidelines.