JAKARTA - An outspoken and controversial critic of President Joko Widodo was caught in an embarrassing lie this week, after claiming she had been assaulted, when her facial injuries were in fact the result of post-cosmetic surgery bruising.

Former actress-turned-political activist Ratna Sarumpaet, who is also part of presidential candidate Prabowo Subianto's campaign team, confessed to the bizarre fib on Wednesday (Oct 3), but only after the police had exposed her lie just hours earlier.

"As it turns out, I've become the best hoax creator," said Ms Ratna, 69, as she came clean about her story, fabricated to cover-up a three-night stay at Bina Estetika, an aesthetic hospital in Jakarta last week.

"When I returned home, I needed a reason to explain to my children why my face was bruised, so I told them I was attacked," she added.

Tempo news, quoting a hospital spokesman, confirmed in a report on Thursday that a patient with the initials R. S. had undergone treatment from Sept 21 to 24.

"She has been our patient for a long time," the spokesman said.

What Ms Ratna must have thought would be a white lie escalated and went viral online, eventually finding its way into news headlines alongside the humanitarian crisis in quake-stricken Central Sulawesi.

Mr Prabowo and his running mate Sandiaga Uno are contesting against Mr Joko and senior ulema, Dr Ma'ruf Amin, in the 2019 presidential election.

On hearing about the assault on Ms Ratna, Mr Prabowo quickly denounced the violence on his campaign staff member and called for the police to take action.

Unsurprisingly, her lie also became fodder for other politicians from both sides hoping to capitalise on the situation in the run-up to the election.

Unfortunately for Ms Ratna, it also prompted a police investigation despite her refusal to file a report about her claim. 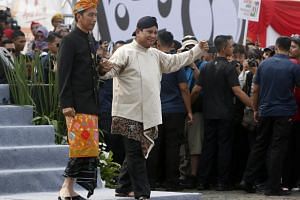 Next Indonesia presidential election — how do we bring the elite on board?: The Jakarta Post contributors

In a press conference held on Wednesday, the police in Jakarta presented evidence to prove that Ms Ratna had lied about being assaulted in Bandung, West Java, after attending a conference.

The capital police's General Crimes director Nico Afinta, referring to security camera footage from Bina Estetika, said that on Sept 21, the date Ms Ratna had claimed she was attacked, she was undergoing treatment at the hospital.

"It's not possible for her to have gone there for treatment after being assaulted," he added.

On Thursday, police spokesman Setyo Wasisto said at least five police reports have been made, demanding that Ms Ratna be prosecuted for falsehood.

He also revealed that during the initial probe into her assault claim, investigators discovered that Ms Ratna had paid for the treatment at Bina Estetika from a bank account used to collect funds for victims of the June 18 Lake Toba ferry tragedy.

More than 160 passengers of the KM Sinar Bangun have been presumed dead after the ferry, reportedly overloaded, sank to the bottom of the lake in North Sumatra.

Mr Prabowo has apologised over the way Ms Ratna conducted herself. Taking responsibility for a member of his campaign, he explained that though the team is only a few months old, it was still no excuse for Ms Ratna's behaviour.

"If you're wrong, then you're wrong," said Mr Prabowo in a statement in response to queries from The Straits Times on Thursday. "And as the leader of our committee, I apologise to the public for amplifying something we were convinced was true."

The former army general also confirmed that he had asked Ms Ratna to resign from his campaign team and she did so via a letter on Wednesday night.

Mr Prabowo said he will not hinder any legal action against Ms Ratna as "she needs to take responsibility for her actions".

"We also do not tolerate fake news, and that is why we have firmly decided that if a member of our team publicly spreads lies, we will reprimand such actions, and we will ask authorities to take the necessary legal action," he added.

Ms Ratna, who is known to be a staunch critic of the President, who goes by his moniker Jokowi, has had a long history of courting controversy in both domestic politics and the local performing arts scene.

In the 1990s, she was known as an anti-Suharto activist, and was behind an eerie silent performance at a 1997 arts festival that featured a scantily clad man covered in red slime emerging from a giant plastic urn as Indonesia's Proclamation of Independence was being chanted.

Last year, she was among a group of anti-government activists arrested on allegations of treason, following the Dec 12 street protest against former Jakarta governor Basuki Tjahaja Purnama, better known as Ahok.