In his commentary, the writer cautions against fanning the anti-China sentiment in the country.

KUALA LUMPUR (THE STAR/ASIA NEWS NETWORK) - A graphic being circulated on social media has the Chinese flag planted all over a map of Peninsular Malaysia, suggesting that Red China has taken over our land.

The political message is clear: the Najib Administration is hawking the country.

Framed against the backdrop of a heated general election, everything is fair game, with no sacred cows, but the anti-China campaign is detrimental to the country and people.

Besides reeking of racism, it will drive Chinese investors away from Malaysia if the country is perceived as being hostile.

The reality is that many other countries will roll the red carpet for China, inviting the eastern giant to pour money into their countries, but in an emotional elections campaign, rhetoric seems to have prevailed above rationale and logic.

It didn't help that Tun Dr Mahathir Mohamad, in a recent interview with Reuters, warned that Chinese investors in Malaysia will face more scrutiny if he regained power in the upcoming election.

He reportedly said that Chinese investment was welcome if companies which set up operations in Malaysia employed locals and brought in capital and technology to the country, but "this wasn't the case now."

"Lots of people don't like Chinese investments," the former prime minister claims, saying "we are for Malaysians. We want to defend the rights of Malaysians. We don't want to sell chunks of this country to foreign companies who will develop whole towns".

Last week, Dr Mahathir said Malaysia will stop borrowing from China, adding he would review Chinese investments if his political coalition was put in charge.

He told the Associated Press that "in the case of projects, we may have to study whether we would continue, or slow down or negotiate the terms".

That's not a revenue stream to dismiss flippantly.

Recently, the Chinese Ambassador to Malaysia, Bai Tian, gave a firm reassurance that the republic would import more Malaysian palm oil and palm-based products, stressing there would be no cap on its imports.

He said: "We will not set any limit", and "there will be no 'glass ceiling' for the import of Malaysian palm oil and related products".

As for the export of rubber and its products to China, Plantation Industries and Commodities Minister Datuk Seri Mah Siew Keong revealed that China has overtaken the United States and the European Union to become the top export destination for Malaysia.

The total export of rubber and related products to China in the first 11 months last year jumped by 76 per cent year on year to RM7.45 billion, compared to RM4.23 billion in the same period in 2016.

These are real facts and figures.

This is not fake news.

All these huge imports by China will directly benefit Felda settlers.

Surely we need to treat our No. 1 customer well, and not kick them in their derriere or allow ourselves to be viewed with fear and ridiculed in election rallies, which we seem to be adept at.

Palm oil is straining under the weight of huge challenges from unfriendly EU countries, which are dead against the industry.

In a move to lift oil seed prices and encourage domestic supply of soybean and grapeseed, even India has raised its import tax on crude and refined palm oil to its highest level in more than a decade.

As one news article reported, "over the last 30 years, China's economic growth has been phenomenal. A country of 1.3 billion with the biggest number of poor people, has propelled more than 600 million into the middle class.

"She is adding 30 million (incidentally, Malaysia's total population) to this number every year. Most respectable studies are predicting the Chinese economy will be bigger than the US' before 2030. Bloomberg says this will happen in 2026." 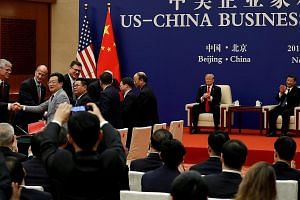 Who else but China can rein in Uncle Sam?

As commentator John Lo correctly wrote in Free Malaysia Today: "President Donald Trump's inward-looking policy is hastening the decline of the US. The US and her allies have ruled the world and imposed their will on other countries in the name of democracy and promise of prosperity for a few hundred years.

"Very few countries have benefited, and many have suffered by adopting or submitting to the US' will. China's economic growth model has shown to be better than that of the West's.

In June 2017, trade with China totalled RM22.75 billion, up by 8.7 per cent from RM20.92 billion - and the cash registers will ring louder as China's wealth increases.

Of course, then there's Proton Holdings, which registered losses of up to RM one billion in 2017. No one dared touch the national car maker, which, to put it politely, was well past the ICU stage. Even a defibrillator was useless.

For decades, Malaysians had to pay so much for imported cars, having to put up with protectionist measures and the obligatory national pride. No one was prepared to tell Dr Mahathir that the business model wasn't workable anymore.

Then, China stepped in. Chinese automaker Zhejiang Geely Holding Group came to the rescue and took up a 49 per cent stake in Proton. Geely is also the owner of Volvo, Boyue and the London Taxi Company, which produces the city's iconic cab.

After Proton was sold to Geely, Dr Mahathir said he was saddened, but in 2014, it was he who travelled to China to meet the manufacturer to seek a Proton partnership, a bid which ultimately fell through.

On the tourism front, Malaysia is expected to hit the four million mark for inbound tourists from China this year. This is a trickle from the Chinese point of view, but with a fast-expanding middle class, the figures will surely spike.

Among the projects that have seen significant Chinese investments in recent years are the Forest City in Iskandar Malaysia (RM405 billion), the East Coast Rail Link (RM55 billion) and Melaka Gateway (RM29 billion).

"While the outlook for China's ODI (overseas direct investments) appears to have dimmed, Malaysia has become the fourth largest recipient of China's ODI globally this year.

"In the latest China Going Global Investment Index 2017 report by the Economist Intelligence Unit, Malaysia has jumped to fourth position in 2017, compared with 20th in 2015."

"The significant improvement is mainly a result of Malaysia's important participation in BRI-related projects, apart from the welcoming attitude towards Chinese investment."

The stakes are simply too high for politicians to turn China into a bogeyman and instil fear in the voters' minds, particularly in the Malay heartland.

"I am willing to take a bet that should the Opposition take over the government, they will run to Beijing first for investment. The reason is simple, the US will not invest much here. Europe is down.

"Japan has been in the doldrums for more than 20 years. They need investments more than Malaysia does. It is not wise to run down China's investment for the sake of political campaigning," Lo wrote.

"If the Opposition has any reservations, they should direct their criticism at the Government and not implicate China. To say that China is giving kickbacks is in bad taste and shows insensitivity and crudeness."

Claims abound about the loss of sovereignty when, in fact, the properties were constructed on reclaimed land, and not on existing plots in the state.

The sprawling property will be built on land that never existed prior.

Instead, it is China's sixth most successful property developer in terms of sales, and has a market capitalisation of US$61.87 billion (S$80.5 billion).

Another bit of nonsense implicating China is the claim that the Government had granted tax exemption to federal projects, such as the East Coast Rail Link (ECRL) built by the Chinese, a move designed to anger the Malays. But during Dr Mahathir's time, under the Sales and Services Tax (SST) system in the 1980s, exemption was given to several mega projects, including the Kuala Lumpur International Airport (KLIA), Express Rail Link, Smart Tunnel, Bukit Jalil Stadium, as well as to independent power producers.

If GST relief was not offered to China Communications Construction (CCC) Sdn Bhd for the ECRL project, it would have cost a lot more, thus increasing the country's debt and incurring huge losses.

But leading up to the elections, rhyme or reason get thrown out the window, and facts and figures take a back seat. For some people, in their anger, truths are brushed aside at the expense of damaging the goodwill extended by China.

Those who have dealt with China will tell you they value friendship.

They remember their friends - and their foes, too.

The writer is The Star media group's managing director/chief executive officer. The Star is a member of The Straits Times media partner Asia News Network, an alliance of 23 news media entities.