KANGAR, Perlis (THE STAR/ASIA NEWS NETWORK) - Another launderette in Malaysia serving only Muslims has been found operating in Perlis - even as the Sultan of Johor and the government sent out a message that such segregation must not happen in the country.

The self-service outlet in Jalan Kampung Bakau here has a sign that says, "This laundry is dedicated for Muslim use only".

The main signboard stated that the shop practises the "Islamic laundry concept".

A call made to the mobile number listed at the shop was answered by a man claiming to be the owner. He said he opened the laundry to serve only Muslims.

When asked why, the man said it was done for the "comfort" of Muslim customers. He urged non-Muslims to use other launderettes and stressed that the matter should not be turned into a controversy.

Perlis Mufti Mohd Asri Zainal Abidin, one of the vocal critics against the "Muslim-only" launderette in Muar, came down hard on the shop, making it clear that the state would not agree to any approach which segregated the people. 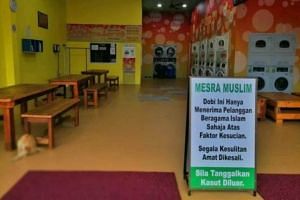 "I have received an instruction from Tuanku (the Raja Muda of Perlis) to investigate the matter and we will do it right away," he said in a WhatsApp message.

On Wednesday (Sept 27), the controversial self-service launderette in Taman Seri Cempaka in Muar abandoned its Muslim-only policy and opened its business to all.

After a dressing down by the Sultan of Johor on Tuesday, the owner apologised for putting up a signage at his outlet saying that it was for Muslim customers only.

The Sultan of Johor, Sultan Ibrahim Ibni Almarhum Sultan Iskandar, ordered the launderette in Muar to immediately stop its discriminatory practice or risk being shut down.

"I cannot accept this nonsense. This is Johor, which belongs to Bangsa Johor and it belongs to all races and faiths. This is a progressive, modern and moderate state.

"This is not a Taleban state and as the head of Islam in Johor, I find this action to be totally unacceptable as this is extremist in nature," he said.

The Muar launderette owner, who refused to be named, said he had obeyed Sultan Ibrahim's decree.

"I regret the issue and I will obey His Majesty's command," said the owner, adding that he took down the sign on Wednesday morning.