PETALING JAYA (THE STAR/ASIA NEWS NETWORK) - The 40-year-old Muslim father who started an online petition asking for child marriages to be outlawed has written a letter to the Deputy Prime Minister over her lack of action.

Mr Umran Kadir, a Malaysian who is based in the United Kingdom, said his petition on change.org has received nearly 22,000 signatures since he initiated it on July 11.

"This is despite it remaining a truly private initiative backed by no organisations.

"It has been endorsed by people of all faiths and backgrounds, including a substantial number of Muslim men and women.

"I feel it is incumbent upon me to try and translate all the momentum into concrete results so I have drafted an open letter to Deputy Prime Minister Datuk Seri Dr Wan Azizah Wan Ismail," he said.

Various groups have taken Dr Wan Azizah, also the Women, Family and Community Development Minister, to task over her inaction against the 41-year-old Kelantanese man who married an 11-year-old Thai girl.

The Joint Action Group for Gender Equality (JAG) said her failure to take swift action against the man showed a lack of political will. 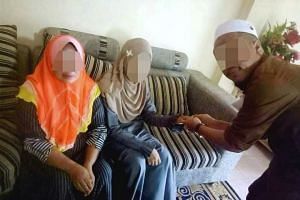 Married at 11 to a 41-year-old man: Malaysia spars over child brides

Lawyers for Liberty executive director Latheefa Koya also lambasted Dr Wan Azizah for delaying action, saying that there was no excuse or complexity as the facts were clear that he sexually groomed the girl.

Mr Umran's letter to the Deputy Prime Minister is reproduced verbatim below:

On July 11, I started a petition calling on the Federal Government to immediately do everything in its power to ban and criminalise the vile and state-sanctioned practice of child marriage as it provides a licence to paedophiles to prey on our children, in particular our girls.

To date, the petition has been signed by over 20,000 people and that number continues to rise with each passing day. A significant proportion of the signatories are Muslim men and women with many signatories having left public comments.

Nevertheless, if it was not already obvious to you, people of all faiths and ethnicities are united in their anger and utter revulsion that such a practice is condoned under Malaysian law.

A stop must be put to this immediately. No other outcome is acceptable.

The reports of a 41-year-old man grooming a seven-year old girl and then marrying her at the age of 11 has been in the press for some weeks. A piece on it even appeared in The New York Times a few days ago.

Since the issue hit the headlines, many of us have been appalled by the lack of a robust, decisive and urgent response from you on this hugely important issue.

More recently, press reports dated Aug 1 carried a baffling quote from you that "more evidence" is needed in the case of the 41-year-old man marrying the 11-year-old child!

Just what more evidence do you need to successfully charge the man under the Sexual Offences Against Children Act 2017? To be vague and wishy-washy simply will not do at this stage.

Surely there can be nothing more important than the safeguarding of children?

As Minister of Women and Family Development you must unequivocally state the position that child marriage will not be sanctioned under any laws in Malaysia, be they religious or otherwise, and that any evidence of those pursuing any form of sexual or inappropriate behaviour with children must be prosecuted to the fullest extent possible under the law.

Your deeds must match those words. Nothing else will be acceptable.

In any society there will always be a fringe element. Our society is no different, but you must simply not let them intimidate you or in any way dictate the discourse or public policy. To allow this will only embolden them and disempower the vast majority of Malaysians who are law abiding and patriotic.

Instead, we insist that you display courage and leadership and be unafraid to be guided by your moral compass.

It is frustrating that post-May 9 2018 that the Malaysian Government must still be shamed and pressured into doing the right thing.

At a talk delivered by your husband in London he spoke of his aspiration that Malaysia should become a beacon of hope in a fractured world and in particular, that it could serve as a model for other Muslim majority countries to emulate.

Yet, on this most important of issues, your husband has very disappointingly remained silent and other Muslim majority countries are already leading the way.

President Jokowi (referring to Indonesian President Joko Widodo) is reported at the end of April 2018 to have said that the Indonesian government is already taking steps to ban child marriages.

If indeed you share your husband's vision of making Malaysia a model worthy of emulating, then decisive and quick action is needed from you on this issue.

The people have spoken out loudly and clearly.

You must heed our call to action.

The following must be done without any further delay:

1. Prosecute the 41-year-old man under the Sexual Offences Against Children Act 2017;

2. Table in Parliament what your plans are to put a total stop on the practice throughout Malaysia, including a clear indication of timeframes that we can hold you to;

3. Stop making statements that come across as weak and indecisive; and

I look forward to reading of the swift and decisive action that you will be taking on this issue going forward so that the despicable practice of child marriage becomes a thing of the past in Malaysia.