President Rodrigo Duterte is placing Boracay under a “state of calamity” to help tens of thousands of workers affected by his order to close the Philippines’ most popular island resort for six months.

Late on Wednesday (April 4), Mr Duterte ordered the total shutdown of Boracay, starting from April 26, in a bid to rescue from ruin a once idyllic island known for powdery beaches, spectacular sunsets and festive nightlife.

“There will be a declaration of a state of calamity,” Mr Harry Roque, a spokesman for Mr Duterte, said at a news briefing on Thursday (April 5).

He said this would allow the government to use some 2 billion pesos (S$50 million) in “calamity funds” to help tide over some 36,000 hotel and resort workers, masseuses, tattoo artists and vendors, among others, who will be displaced.

Businesses on the 1,032ha island appear resigned to a move the government said is non-negotiable.

“We are a bit depressed right now, but we need to move on. I feel more for the 30,000 employees. We need to keep their heads above water,” said Mr Jose Clemente, president of the Tourism Congress of the Philippines.

Discovery World, which operates an 88-room resort on Boracay, told Reuters the closure will have an impact on the resort’s large revenue.

Philippines shuts off its most popular island

Cebu Pacific, Philippine Airlines and AirAsia Philippines plan to scale down services to two airports in Caticlan and Kalibo – towns on nearby Panay island that service Boracay – from April 26 to Oct 25.

Cebu Pacific has cancelled 19 flights and anticipates a loss of US$3 million (S$3.94 million) to US$5 million in the next six months.

AirAsia is suspending 13 flights, but will mount additional ones to destinations like Palawan, Bohol, Cebu and Davao. The carriers are offering full refunds or flights elsewhere. 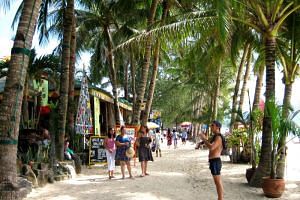 The impact on hotels and resorts is yet to be assessed. Boracay hosts 1,900 businesses, including global hotel chains like Shangri-La and Movenpick.

Mr Karl Chusuey, vice-president for marketing at Henann Group, which operates one of Boracay’s largest resorts, said it was receiving cancellations “ as expected”.

“We’re not closing the island. But we will not allow tourists – foreign and local – to come during the time of the rehabilitation,” he said.

The government said it is ready to take a temporary hit on tourism.

“We have to swallow the bitter pill if we wish to sustain and protect the island of Boracay,” said Mr Alegre.

Located off the northern tip of Panay, Boracay drew over 2 million visitors in 2017. It generated some 56 billion pesos in tourism receipts.

But the influx of tourists and corruption among local officials, that has allowed commercial establishments to blatantly disregard regulations to protect the environment and zoning laws, have threatened to turn Boracay into a “dead island” in less than a decade, a government study found.

He has vented fury at an explosion of unlicensed developments on the island, including encroachments on forest and beach land. So far, the authorities have found 948 illegal structures, half of which they aim to destroy during the closure.

The government has yet to provide specifics about the rehabilitation. But Mr Epimaco Densing, assistant secretary of the interior, said priority would be given to building drainage, sewage lines and water treatment facilities to handle 90 to 115 tons of waste a day, of which only 30 tons are taken off the island.

Only 47 per cent of the 1,900 establishments in Boracay are connected to existing sewage lines.

“Where are they discharging wastes? There lies the problem. Hopefully we can see the entire picture in the next few weeks,” he said.