JAKARTA - Former Jakarta governor Basuki Tjahaja Purnama, who is serving a two-year jail sentence for blasphemy, will refuse parole in hope of an early release date.

Better known as Ahok, the Chinese-Christian politician will be eligible for parole in August this year, which means he will be released for up to four hours a day.

"But he has decided not to take it, and will wait until he is completely free instead," said his sister Fifi Lety Indra in an Instagram post on Wednesday (July 11).

According to his sister, there is a chance Basuki could be released as early as next month after having served almost two-thirds of his sentence, and taking into account the possible remission he may be granted for good behaviour.

"But rather than (speculate), let's wait for the exact count in August," she added.

Local prison authorities confirmed that Basuki has served two-thirds of his sentence and has been "cooperative" during his time behind bars, although they would not comment if he has been granted parole yet.

As a Christian, Basuki was eligible - and given remission - for the Christmas holidays last year. 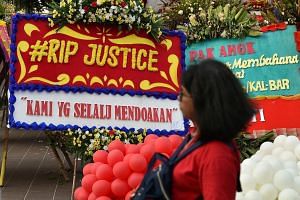 Why Ahok remains a man to watch in Indonesian politics: The Jakarta Post columnist

He may also have more time shaved off his sentence during Indonesia's Independence Day celebrations on Aug 17.

An early release would cap what has been a trying couple of years for Basuki, who was jailed for two years in May last year (2017) after a Jakarta court found him guilty of blasphemy against Islam.

The controversial sentence was handed down weeks after he had lost the Jakarta gubernatorial election to his Muslim rival Anies Baswedan.

Prior to his downfall, Basuki was poised to make history as the first elected governor of Indonesia's capital Jakarta who is not only Chinese, but also Christian.

But his straight-talking manner and championing of pluralism, which endeared him to many, also saw his opponents turn that against him.

They had leapt on a speech he made in September 2016, when he referred to the Quran and told constituents not to be deceived by his opponents who say Muslims cannot elect a non-Muslim leader.

Hardline groups like the Islamic Defenders Front (FPI) pounced on his words, and rallied hundreds of thousands of Muslims to take to the streets in protest.

Critics had panned the heavier-than-expected sentence, saying the court had bowed to pressure from hardline groups like the FPI.

In April this year, a court granted his request to divorce on grounds that there was adequate evidence of infidelity by Madam Veronica Tan, his wife of more than 20 years.

The former governor - a post he inherited as deputy to Mr Joko Widodo when the latter was Jakarta governor before he was elected president in 2014 - remains a popular figure.