KUALA LUMPUR (REUTERS) - As a transgender woman growing up in Brunei, Zoe saw the country's slide towards conservatism from an early age, so plans to introduce strict new Islamic laws this week came as no surprise.

The 19-year-old, who was born male but identified as female from early childhood, is now awaiting the outcome of her asylum application in Canada after fleeing her country late last year.

"Even before syariah law, LGBT+ people could be prosecuted under civil law," Zoe told the Thomson Reuters Foundation, which is identifying her by only one name for her protection.

"I've always been scared of living my life openly in Brunei. I still am. I still think about how I present myself, because I was conditioned to survive."

Brunei, a Muslim-majority former British protectorate with a population of about 400,000, is due to implement syariah laws from April 3, punishing sodomy, adultery and rape with the death penalty, and theft with amputation.

The laws, elements of which were first adopted in 2014, could see LGBT+ (lesbian, gay, bisexual, transgender and related communities) people whipped or stoned to death for same-sex activity. Some aspects of the laws will apply to non-Muslims.

"I knew it was going to happen," said Zoe, who hopes to one day undergo hormone therapy and formally change her name to the one she sometimes goes by. 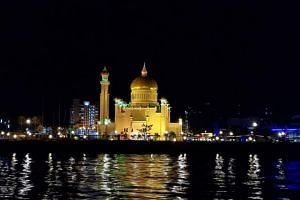 "Our oil reserves were dwindling and the sultan needed a way to control the economy once he started to enforce taxes and reduce the high subsidies."

The Brunei Prime Minister's Department did not respond to an e-mailed request for comment on Monday (April 1).

Brunei does not hold elections and any discontent is assuaged with generous government polices including zero taxes, subsidised housing, and free healthcare and education.

Zoe, who is worried that her LGBT+ friends back in Brunei do not fully appreciate how dangerous the situation will soon become, faces an uncertain future.

"If I get sent back to Brunei, I will confess who I am and what I believe in to the Bruneian authorities," she said.

"I'd rather die being true to myself than resenting a long life. I wish that Muslims who want syariah law just keep it with themselves and God. Not enforce it onto other people."

Sultan Hassanal Bolkiah, 72, is the world's second-longest reigning monarch and prime minister of oil-rich Brunei. He ranks as one of the world's wealthiest people.

Since details of the new laws were announced, actor George Clooney and musician Elton John are among celebrities who have called for a boycott of hotels owned by the government-owned Brunei Investment Agency.

Britain, Australia, New Zealand and the United Nations High Commissioner for Human Rights have all called on Brunei to abandon changes to its penal code.

"It is seriously regrettable that Brunei's decision contravenes a number of international norms on human rights," New Zealand's Foreign Minister Winston Peters said in a statement on Sunday (March 31).

Mr Matthew Woolfe, founder of human rights group The Brunei Project, said it was now very unlikely that Brunei would backtrack, but diplomatic pressure from Asian countries could help ensure the laws are not enforced fully.

"We want to see more Asian governments coming out and speaking out on this. They have been too quiet," said the Australia-based campaigner.

Socially conservative attitudes prevail across Asia, with Myanmar, Malaysia and Singapore banning sexual relationships between men, while Indonesia has seen an increase in raids targeting LGBT+ people in recent years.

Members of Asean, which did not respond to requests for a comment, have a principle of non-interference in one another's domestic affairs.

"I'm not aware of any Asian country having come out and said anything about these laws," said Mr Woolfe.

Previously, homosexuality was illegal in Brunei and punishable by up to 10 years' imprisonment, while the sale of alcohol is banned and evangelism by other religions is forbidden.

Ms Ging Cristobal, project coordinator at OutRight Action International in Manila, urged other Muslim countries in the region to put pressure on Brunei.

"In reality, Brunei will not succumb to pressure from countries that are not Muslim-majority countries," said Ms Cristobal.

"Brunei might say that other regions are imposing on Asia, so it would be good to see other Asian nations condemn these barbaric laws."

Mr Shahiransheriffuddin bin Shahrani Muhammad is a gay man who fled Brunei last year after being charged with sedition for a Facebook post that was critical of the government.

Now seeking asylum in Canada, the 40-year-old was surprised at the speed with which the new syariah laws were being implemented.

"I expected it to happen, just not so soon," he said. "I thought there would be more time for people like me in Brunei to realise that it's better to leave."

Many people in Brunei back the syariah laws because of rising unemployment and crime, he said.

The death penalty has rarely been used in Brunei and the burden of proof needed to secure a conviction for same-sex activities is very high, he added.

Nonetheless, for LGBT+ people, the prospect of going to trial is terrifying, carrying the risk of being the first person to be stoned, he added.

Even if exonerated, they face being stigmatised for the rest of their lives - Ms Cristobal said the new laws gave licence "for other people to see LGBTIQ (people) as criminals and commit violence and abuse towards them".

Khairul, 19, is a gay Muslim man living in Brunei who now fears for his future.

"With the added laws that affect the LGBTQ+ community, I am scared," said Khairul, who asked not to be identified by his real name for fear of reprisals. "My life here will become more complicated and hard.

"The fear of dying has become a reality, while the hope of being accepted by family is now just a dream."