In his commentary, the writer reminds of the virtue of celebrating diversity.

Mandela, who would have been 100 if he were still alive, embodied what diversity is all about. His commitment to uniting his country despite its history of apartheid and racial hatred was legendary.

He dreamt of a united South Africa, which he labelled "a rainbow nation", a phrase initially coined by Archbishop Desmond Tutu.

It wasn't easy for Mandela. But he tried hard. He even used sports to galvanise the nation. His country famously won the Rugby World Cup in 1995, two years after he became president.

Mandela knew that. He had no passion for rugby anyway. Even the jersey was a symbol of white exclusivity. But Mandela wisely donned it when his country's team won the title. He wore the same No. 6 jersey as worn by the captain, Francois Pienaar, the ultimate Afrikaner sportsman.

Mandela was incarcerated for 27 years. He could have been a bitter and vindictive man, but he chose not to. He believed in moving forward, in building bridges, mending perceptions and addressing bigotry. He used rugby for his purpose perfectly.

Obama is the least likely candidate to win the Democrat party primaries, what more the post of the president of the most powerful nation in the world.

He knew what being non-white in America is all about. Some 53 years before he became president, a woman named Rosa Parks defiantly refused to budge from her seat in a bus in Montgomery, Alabama, an act that triggered a civil rights movement across the country.

So, when Obama referred to the French football team to prove his point about diversity, equality and humanity, the very ideals that the late Mandela stood for, it struck the right chord in the world that has gone berserk about immigrants, non-whites and Muslims.

"Just ask the French football team that just won the World Cup. Not all of those folks looked like Gauls to me. But they're French!" he said. And he repeated, "They're all French."

Moral of the story: Look past race to embrace our common humanity. 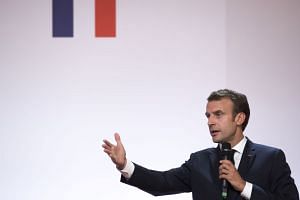 Yes, the French won the 2018 World Cup in style, their second in 20 years. When they won 3-0 against defending champions Brazil in 1998, two of the goals were scored by man-of-the-match Zinedine Zidane. Zidane was born of Algerian migrant parents. Many in the 1998 team were sons of immigrants too.

Flash forward to 2018. Coach Didier Deschamps decided on a squad of harmony before anything else, not necessarily the best players. For him, unity and discipline matter more.

Diversity is the team's greatest strength. In 1998, the far-right wing leader Jean-Marie Le Pen denounced the team full of players of African and Arab descent as "nothing to do with the ideals of France".

This year, 90 per cent of Les Blues have migrant background. Surprisingly, no French political party attacked the diversity in this team.

One of the players, Antoine Griezmann, himself of German-Portuguese descent, even sounded like Mandela when he said, "France today is a France full of colours."

In a world where the US president has been vitriolic in his prejudice against African nations (which he called "s***holes countries"), Muslims and immigrants as a whole, and when the big debate in Europe is about the threat of immigrants, the win by the French national football team hopefully will steer the discourse in the right direction.

The French team make immigrants proud. We hope a new conversation will ensue.

It is not that the prejudices against "Others" in France will end or discrimination will stop immediately. But unbridled nationalism as shown in winning the World Cup will be a lesson well noted in France.

There are people who are sceptical whether the celebratory mood will last.

Some French politicians will go back to their old ways. It is even naïve to think that the football triumph in Russia will change anything.

Yes, like Obama said, we are indeed in "strange" and "uncertain times". But we do hope the French jubilation is translated into real debate on understanding "Others" elsewhere too.

We in Malaysia should also learn about managing race relations better.

With the Pakatan Harapan win in GE14, many believe it is a dawn of a new era - one that is blind to race and religion.

In a climate where politics have divided us and Parliamentarians have been bad examples, we need something else to unite us.

Perhaps the spirit of the heyday of our football glory with Mokhtar Dahari, Soh Chin Aun and Santokh Singh should be revived. We need the Sidek Brothers and Datuk Lee Chong Wei to remind us of diversity in sports.

The writer was an editor and a former chairman of a media company. The Star is a member of The Straits Times media partner Asia News Network, an alliance of 23 news media entities.