The cargo, which was in 12 containers, was reportedly shipped from Kaohsiung in southern Taiwan to Singapore, although it is not known why the ship stopped by Hong Kong.

It said in a statement that the Terrex vehicles and associated equipment used by the SAF for overseas training "was delayed at Hong Kong’s Kwai Chung Container Terminal, due to a request for routine inspections by the Hong Kong Customs authorities".

While the statement did not say how many armoured vehicles were seized, it said that no ammunition was onboard.

"Singapore authorities are providing relevant assistance to the Hong Kong Customs and expect the shipment to return to Singapore expeditiously," said the statement. 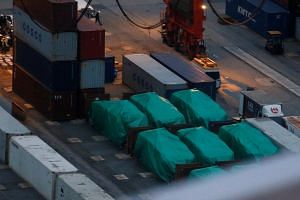 It added: "The Terrex ICVs were used by the Singapore Armed Forces (SAF) in routine overseas training and shipped back via commercial means as with previous exercises."

The SAF conducts overseas training in a dozen or so countries including the United States, Australia, Germany and India. It usually hires commercial shippers to transport military equipment to and from Singapore.

The Terrex is Singapore's latest armoured infantry vehicle. The Singapore-made eight-wheelers are being used by the SAF to provide foot soldiers with added cover and speed in the battlefield. It also gives them invaluable near real-time updates of enemy and friendly troop positions.

A spokesman from Hong Kong's Customs and Excise Department told The Straits Times that it found the "suspected controlled items" were found onboard the vessel during "a route ship search".

"Customs officers will take appropriate follow-up actions on the items," said the spokesman, adding that the items had to be unloaded from the vessel as part of ongoing investigations.

She, however, declined to say if the receiver of the items has been contacted or whether the sender or owner had applied for a valid licence for the controlled items.

According to Hong Kong's Import and Export regulations, a licence can be exempted for prohibited items, such as firearms and ammunition, pharmaceutical products, medicines and radioactive substances, that are transiting through Hong Kong and remain "at all times" on the transportation vessels. But a valid export authorisation or proof of transshipment will still be required for certain items that are used in relation with nuclear, chemical and biological weapons are in transit through Hong Kong, said the spokesman.