This followed an operation that was held on Monday (Dec 9), where 40 Chinese nationals were arrested.

"Of the 65 arrested, four were women. They are aged between 17 and 55, " he told a press conference at its state headquarters in Meru Raya here on Thursday night.

During a blitz in Cyberjaya last month, the department arrested 680 Chinese nationals who were operating from a six-storey building.

A total of 104 Chinese nationals were also arrested in Kota Kinabalu last month.

Khairul Dzaimee said they also found receipts for kitchen appliances bought from a shop in Taman Maluri, Cheras, dated Oct 11 and from another shop in Subang Jaya on Oct 8.

"Based on this, it is a possibility that some of them were those escaped from the operation in Cyberjaya on Nov 20."

"We also found used and unused condoms," he said.

"We believe that one of the houses was their one-stop centre for their activities, " he added. 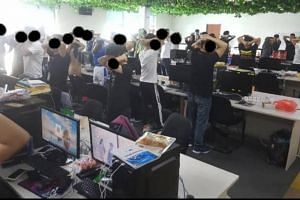 Khairul Dzaimee said the Chinese nationals were relaxed and were unaware about the raids.

"Some tried to escape and there was a brief scuffle with our officers. We managed to control the situation and surround the premises to prevent further escapes, " he added.

Khairul Dzaimee said those arrested would be investigated for overstaying and misuse of visitors' pass.

"We will continue with our operations to uncover more of these activities, " he said.