PUTRAJAYA (THE STAR/ASIA NEWS NETWORK) - Six Umno federal lawmakers have announced that they are leaving the party on Friday (Dec 14), joining the recent exodus of MPs.

A letter signed by the six men to inform the Malay nationalist party of their departure was sent to Umno secretary-general Annuar Musa.

According to sources, the letter was sent at 3.50pm to inform Umno that they were quitting effective Friday.

The lawmakers are from Perak, Kelantan, Selangor, Terengganu, Johor and Penang.

They joined the five of six Umno MPs in Sabah who quit on Wednesday.

Umno, which was the lead party in the Barisan Nasional coalition that governed Malaysia for 61 years until seven months ago, has been hit by a series of defections since it lost power at the May general election.

Umno won 54 federal seats in May, but this dwindled to 43. including the five Sabah defections on Wednesday. 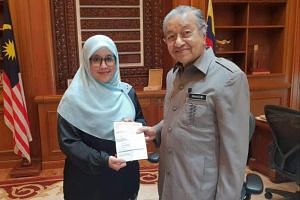 Umno, once a mighty party, hit by more defections and court cases this week

Umno struggles to find footing as Zahid is charged

After the six MPs hopped away on Friday, Umno would be left with 37 MPs in Parliament.

He has said that he is willing to consider the entry of former Umno lawmakers into his party, but that they must first abandon Umno and must not be implicated in corruption cases.

On Friday, too, another party in the ruling Pakatan Harapan alliance, Parti Amanah Negara, said it is willing to accept former Umno lawmakers into its fold.

Meanwhile, former Umno Youth chief Khairy Jamaluddin, a lawmaker from Negeri Sembilan, on Friday called for an "immediate" party election for a new leadership following the exodus of lawmakers and other party members.

Mr Khairy retweeted and agreed with a post calling for Umno to hold an extraordinary general meeting for a new party election.

The initial tweet had called on the Umno supreme council and Youth and Women wings to demand the resignation of party president Ahmad Zahid Hamidi, seen by some as being an ineffectual leader.