PETALING JAYA (THE STAR/ASIA NEWS NETWORK) - Some 5,000 hotels around Malaysia have started implementing the tourism tax for foreigners.

Foreign tourists are charged a flat rate of RM10 (S$3.20) per night per room, while local tourists and permanent residents are exempted from paying the tax.

"Not all hotel operators are ready. We will do it manually until the system is ready," he said.

Cheah said hoteliers will submit their collection to the Customs and Excise Department by next month.

The Customs and Excise Department is taking a friendly approach to encourage hotels and lodging operators to register for the tourism tax, said Director-General Datuk Seri Subromaniam Tholasy.

"We will not be harsh as the announcement of the tax came a little late," he added. 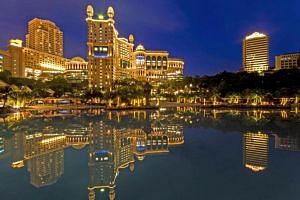 Malaysia to implement tourism tax on Sept 1, flat rate of S$3.20 per room per night

Proceeds from Malaysia's tourism tax to be used for promotion, refurbishment: Tourism Minister

The government announced early last month that the tourism tax was to be enforced from Friday.

Subromaniam said the department will try to contact hotel operators who have yet to register, rather than using a harsh approach. The number of registered accommodation providers so far is 5,000, out of the estimated 10,000 establishments nationwide.

"We are giving hotel operators another month. We expect all to register with us by the end of September," he added.

Bernama reported that hoteliers must display the newly introduced Tourism Tax rate separately from the room rates with the implementation of the tax.

"No exemption for long stay, complimentary stay such as timeshare or loyalty programme and such tax shall be free of GST," he said in a statement here.