JAKARTA - It will take 50 to 100 years for the Raja Ampat coral reef destroyed by a British cruise ship to be restored, Indonesia's Coordinating Minister for Maritime Affairs Luhut Pandjaitan told reporters on Friday (March 17).

"The environment has been affected, fish have disappeared. This is a major problem which we take very seriously. No one should take it lightly," Mr Luhut said.

The cruise ship Caledonian Sky ran aground in waters off Raja Ampat Islands in West Papua province on March 4, destroying nearly 13,000 sq m of coral reefs in what is often described as a pristine beach paradise.

The scale of the damage was caused by the ship's captain Keith Michael Taylor attempting to free the vessel after it ran aground on the reef, said Mr Luhut.

The minister was speaking to reporters on Friday, after meeting the British ambassador to Indonesia, Mr Moazzam Malik, who had been summoned over the issue. 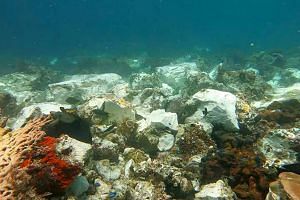 Mr Luhut earlier said the same captain had made a similar mistake before. On that occasion, the cruise ship entered shallow waters off Medan, North Sumatra, also destroying the corals there.

Said Mr Moazzam after the meeting: "We hope the matter can be resolved quickly between the Indonesian authorities and the company that is responsible for this accident and was managing the ship." 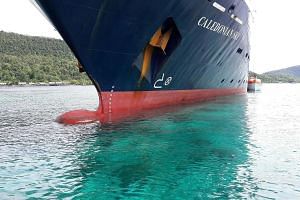 The ambassador added: "I'm disappointed to learn about the damage to this coral reef in West Papua, as we are with any environmental incident that occurs in Indonesia or anywhere else in the world."

Mr Moazzam said he has yet to verify that Capt Taylor is a British national, as reported by the media, but information gathered shows that he lives in the United States and is employed by a Swedish company.

Noble Caledonia, the cruise operator, is based in London.

Mr Luhut admitted that the case is complicated: The ship captain holds a British passport but lives in Florida; the Bahamas-flagged vessel is owned by a Swedish company; and the passengers booked their cruise in Britain.