Here are key points from the 30-minute address, which was nationally televised and delivered in English:

1. 'FEEL DEEPLY FOR THE SUFFERING'

Suu Kyi avoided using the term "Rohingya" - a word which many in the Buddhist-majority nation refuse to use. They say the Muslim Rohingya are not a distinct ethnic group but illegal immigrants from Bangladesh.

But she did express concern for the "suffering of all people" swept up in the latest violence, her most compassionate words yet for the more than 410,000 Rohingya who have fled Rakhine state for Bangladesh.

"We feel deeply for the suffering of all the people who have been caught up in the conflict. Those who have had to flee their homes are many. Not just Muslims and (ethnic) Rakhines, but also small minority groups," she said. 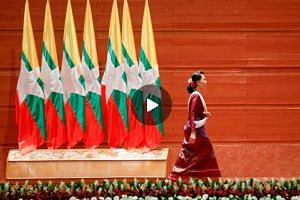 While Suu Kyi acknowledged the intensity of the violence, she refused to blame any specific group.

Rohingya refugees, rights groups and the UN have accused the military and Buddhist mobs of using bullets and arson to drive out the Rohingya in a systematic ethnic cleansing campaign. 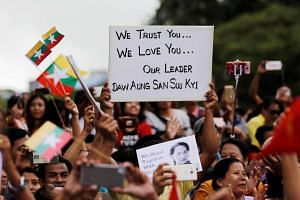 In Pictures: Aung San Suu Kyi addresses the nation about the Rakhine and Rohingya crisis

The army and government, meanwhile, have defended the military operations as a legitimate crackdown on Rohingya militants who raided police posts in late August, killing around a dozen officers.

"I understand that many of our friends throughout the world are concerned by reports of villages being burned and hordes of refugees fleeing," Suu Kyi said.

"We too are concerned. We want to find out what the real problems are. There have been allegations and counter-allegations, and we have to listen to all of them. We have to make sure that these allegations are based on solid evidence before we take action." She vowed to act against those who violated the law or human rights, "regardless of their religion, race or political position".

Suu Kyi's most concrete promise was a vow to begin a "verification process" to repatriate those who have fled.

"There has been a call for the repatriation of refugees who have fled from Myanmar to Bangladesh. We are prepared to start the verification process at any time," Suu Kyi said.

She said the repatriation would follow the principles of an agreement with Bangladesh in the early 1990s that allowed the return of Rohingya who could prove residence in Myanmar.

"We will abide by the criteria that was agreed on at that time," said Suu Kyi. "Those who have been verified as refugees from this country will be accepted without any problems and with full assurance of their security and access to humanitarian aid." But verification will be complicated. Most Rohingya fled with few belongings while homes - potentially containing any documentation - have been torched.

Suu Kyi appealed for outside observers to visit Myanmar and see the situation for themselves - despite the severe restrictions her government has placed on access to the conflict zone in northern Rakhine.

Humanitarian aid has been severely curtailed in the region since late August and the media have only been allowed into the area on government-run visits.

"We invite you to join us, to talk to us, to discuss with us, to go with us to the problem areas, where we can guarantee security for you," she said.

"We would like you to join us there, see for yourself what is happening, think for yourself, what can you do to remove these problems?"

Suu Kyi appealed for understanding of Myanmar's emergence from decades of military rule.

The army loosened its monopoly on power in 2011 but has retained control of security policy and other key branches of government.

"Burma is a complex nation as you all know," Suu Kyi said. "And its complexities are compounded by the fact that people expect us to overcome all these challenges in as short a time as possible." "We are a young and fragile democracy facing many problems. But we have to cope with them all at the same time... we cannot just concentrate on a few." "It is sad that in meeting with our diplomatic community I am obliged to focus on just a very few of our problems, when there are so many which I think we could resolve together."