IPOH (THE STAR/ASIA NEWS NETWORK) - A three-year-old boy was rushed to the hospital after his pants were caught in an escalator, causing both the fabric and the tip of his penis to get stuck in the contraption at a supermarket in the town of Bagan Serai.

Upon receiving a distress call at 8.16pm on Monday (June 6), the Malaysia's Fire and Rescue Department rushed to the scene and found the boy bawling as his lower body was trapped in the escalator.

"The mishap happened when they were reaching the top of the escalator," he explained.

"His pants got pulled in at the start, before the tip of his penis got caught as well."

Nasir said the escalator had already stopped moving when his team arrived at the scene. 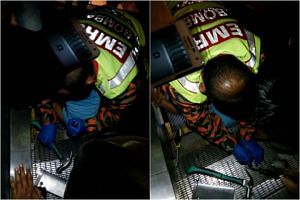 "We used crowbars to remove the escalator panels surrounding the boy. Within half an hour, we got him out, and our Emergency Rescue Service team sent him to the Taiping Hospital for treatment," he added.

In February, a four-year-old boy's lower left foot was severed by an escalator at Kuala Lumpur Sentral, prompting the country's Department of Occupational Safety and Health to launch a nationwide operation to carry out random safety checks on escalators in shopping malls.