Senior journalists Kyaw Zaw Linn, Nayee Min and Phyo Wai were detained at around 10am and sent to Insein Prison.

"They are charged with article 505(b) and cannot apply for bail," Mr Kyi Myint, a lawyer representing the three journalists, said by phone.

"There is no freedom of the press," he said, adding that Myanmar had waited decades for democratic rule, but "look at the situation now".

Daw Nilar Kyaw, a minister in the Yangon Regional Government, did not immediately return calls for comment.

Local media reports said the Yangon Regional Government had filed a lawsuit against the journalists for committing an offence against the state for publishing "incorrect information" about the government, and that if found guilty, the journalists could receive sentences of up to two years in prison.

The arrest follows the sentencing in August of Reuters journalists Wa Lone and Kyaw Soe Oo to seven years in prison after they were found guilty of breaching the country's Official Secrets Act. 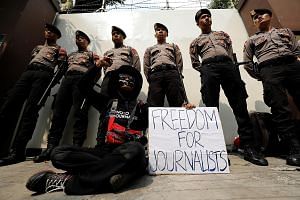 Myanmar Reuters reporter on trial over Rohingya story says he was hooded, deprived of sleep

The two reporters were arrested on Dec 12 after police accused them of violating the 1923 law by acquiring "important secret papers" from two policemen.

They both pleaded not guilty, with Reuters citing "compelling evidence of a police set-up".

International criticism over that case damaged Myanmar's reputation, making it harder for companies that sought opportunities in the country after the US lifted broad-based sanctions following its transition to democracy.

Ms Aung San Suu Kyi, who had been a political prisoner before taking power, has defended the prison terms handed down to the Reuters journalists, and questioned whether international critics of the verdict had actually read the court's judgement.