MANILA - More than 2.8 million Muslims cast their votes on Monday (Jan 21) in a referendum meant to carve out their own territory in the restive southern part of the Philippines and end nearly half a century of separatist violence in a region plagued by poverty and Islamist extremism.

A clear "yes" vote is widely expected, despite opposition from a number of Muslim politicians who have refused to cede power to a new political entity that will control a third of Mindanao, the Philippines' second-biggest island.

Results are expected to be out by Friday (Jan 25).

Security officials said the referendum was uneventful overall, despite reports of "flying voters" and harassment of poll officials. 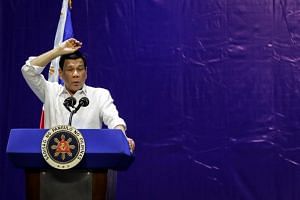 The referendum seeks to rally support behind a law, signed by President Rodrigo Duterte last July (2018), that will create a self-administered, parliamentary region known as the Bangsamoro, or "nation of Moros", by 2022.

The area covers parts of Mindanao and a chain of dozens of small islands to the west notorious for piracy and banditry. About five million Muslims live in the region which, although rich in mineral resources, is the poorest of the 16 regions in the vast archipelago.

The Bangsamoro will replace an existing autonomous region with a larger, better-funded and more powerful entity. Three-fourths of tax takings in the region will go to this entity which is also expected to receive some US$1.3 billion in an annual grant to aid development.

Although many powers will be devolved, the central government will keep control of security.

Most belong to smaller outfits like the Abu Sayyaf Group, which has capitalised on decades of instability in Mindanao to generate tens of millions of dollars from piracy and ransom payments.

But, in a demonstration of the scale of the trouble they can cause, about a thousand militants stormed and took control of half of the southern city of Marawi in May 2017 for five months in what turned into the Philippines' biggest security crisis in years.

By the time the fighting ended, more than 1,100 people, most of them militants, were dead and nearly half a million displaced from their homes.

"It offers the best chance at finally delivering a political solution to the alienation of the Moro community from the Philippine state… seriously degrading the mutually beneficial ties between Moro insurgent and terrorist groups and regional and global terrorist groups," said Dr Malcolm Cook, a senior fellow at the Institute of Southeast Asian Studies' Yusof Ishak Institute.

Mr Richard Heydarian, a Manila-based defence and security analyst, said victory for the "yes" side would have to be decisive.

"They have to get more than 50 per cent plus one, so that the mandate is clear, so that the leaders will have enough political capital to rally and mobilise support," he said.

Another political analyst, Mr Rommel Banlaoi, of the Philippine Institution for Peace, Violence and Terrorism Research, however, saw the plebiscite as "just a small step to a much longer process", given diverse expectations for the Bangsamoro region and residual resistance from some armed quarters.