SINGAPORE - Two senior executives of Singapore-based Wilmar International, the world's largest palm oil trader, have resigned, days after a Greenpeace report linked them to an Indonesian firm accused of deforestation.

The CEO of Gama group of companies is Mr Martua Sitorus, also Wilmar's non-executive director and board member, who set up Gama with his brother.

Greenpeace said the findings damaged Wilmar's reputation and its 2013 commitment to halt deforestation across all its concessions and its many palm oil suppliers.

But Wilmar has denied any management links to Gama.

In an announcement to the Singapore Stock Exchange on Tuesday (July 3), Wilmar said Mr Sitorus will step down on July 15. He co-founded the company in 1991 with current chairman and CEO Kuok Khoon Hong.

Wilmar also announced the resignation of its country head for Indonesia, Mr Hendri Saksti, who is Mr Sitorus's brother-in-law. 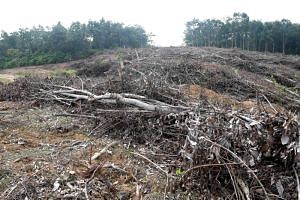 In its investigation released last week, Greenpeace accused the three firms owned by Gama Corp of clearing forest area totalling 21,500 ha - about a third of the size of Singapore - since 2013.

It said Wilmar's palm oil supply chain was tainted by its links to Gama. It claimed that analysis of trade data showed that Wilmar traded palm oil from Gama, despite being aware that the latter was violating Wilmar's No Deforestation, No Peat, No Exploitation (NDPE) policy by clearing rainforests.

"This is not just about Gama or Martua Sitorus. It's about Wilmar's refusal to do what it takes to keep forest destroyers out of its supply chain. If Wilmar is serious about reform, the first step is to prove its palm oil suppliers are clean by making them publish maps of all their concessions," Mr Kiki Taufik, global head of Greenpeace's Indonesia forests campaign, said on Tuesday.

In response to the Greenpeace report, Wilmar said it took the allegations seriously but stressed that "Wilmar and Gama are two separate corporate groups operating independently of each other. Neither company has control over the other."

Wilmar said that as of June 20 this year, it had ceased sourcing from all suppliers allegedly associated with the Gama group of companies as identified by Greenpeace, until they could prove otherwise.

In an e-mail to The Straits Times, Wilmar said that Mr Sitorus and Mr Saksti had previously indicated their intention to resign but had been asked to stay on until their replacements were found.

"In order to put to rest allegations of conflict of interest between Wilmar and Gama, Mr Sitorus and Mr Saksti have decided to bring forward their resignations," the company said.

The case highlights the challenge major palm oil suppliers face in being able to fully trace all sources of palm oil from the plantation to the refinery, and right up to the supermarket shelf.

Wilmar, along with Golden Agri-Resources, Musim Mas and others, have been trying to map their supply chains to ensure "tainted" oil palm grown on illegally cleared land does not get mixed in.

Wilmar has said it screens, documents and monitors its third-party suppliers and will remove any that does not comply. But investigations by some non-governmental organisations have found gaps in major palm oil companies' supply chains.

In a letter to Greenpeace on Wednesday, Wilmar CEO, Mr Kuok, outlined the next steps to strengthen the company's environmental policies.

"We will continue to engage and work with our shareholders to ensure that we are accountable for our supply chain," he said.

The steps include releasing concession maps of suppliers that are subject to the firm's grievance process, work towards the protection and rehabilitation of remaining forests in concession areas and have a more robust framework for verifying NDPE compliance at refinery level by the end of this year.