Malaysia’s controversial state fund 1Malaysia Development Berhad (1MDB) is back in the news with the United States’ Department of Justice (DoJ) filing a civil suit to recover more than US$1 billion (S$1.35 billion) in assets.

“The Malaysian people were defrauded on an enormous scale (in) a scheme whose tentacles reached around the world," FBI Deputy Director Andrew McCabe said when announcing the legal action on Wednesday (July 20).

Here’s a quick look at the  troubled investment fund and its latest woes:

It is an investment fund owned by the Malaysian Finance Ministry that took shape in 2009 under Prime Minister and Finance Minister Najib Razak, who led its advisory board until May this year. The fund started off as the Terengganu Investment Authority but was developed into its present form with the help of businessman Low Taek Jho, better known as Jho Low.

2. Why is it controversial? 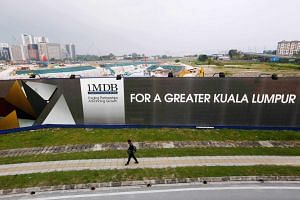 1MDB raised billions of dollars through bond issues for use in its investment projects. The fund in its early days said it invested in petroleum assets and bought power plants in several countries. But it borrowed heavily and soon racked up debts of some RM42 billion (S$14 billion).

It has been paring down its debt burden by various means, including selling its power plants to a China company. But it faces a bigger, politically explosive problem - billions in missing funds.

3. What about the missing money?

Apart from debt issues, 1MDB faces a series of probes on large sums of money that appear to have been siphoned off illegally via a global network of shell companies.
Countries such as the United States, Switzerland and Singapore are also drawn into the investigations because of the movement of money through the international banking system.

Swiss investigators estimate that about US$4 billion have vanished from 1MDB’s coffers.

Separately, Malaysia’s parliamentary Public Accounts Committee (PAC)  concluded in April, 2016  after its probe that some US$3.5 billion had disappeared into a company based in the British Virgin Islands that has since been closed.

The DoJ’s civil suit to seize over US$1 billion in assets is eye-opening for the large sums involved, the names named and the connections made in the money trail.

US officials also noted the contrast between 1MDB’s mission of national development and the lavish spending on luxury residential properties, pricey artworks and gambling binges by the small group of people named in its lawsuit. The aim is to force the forfeiture of their ill-gotten assets.

In an ironic twist, some of the funds were said to have gone into the making of the Hollywood movie The Wolf Of Wall Street’ which featured Leonardo DiCaprio in the role of a stockbroker convicted of fraud. The film production company insists its source of funding is legitimate.

4. Why is this 1MDB money problem a political issue?

The DoJ’s filing named as beneficiaries of this money Riza Aziz, stepson of Mr  Najib,  and Mr Jho Low, a close friend of Mr Riza.

An unnamed top “Malaysian Official 1” was also said to have received millions diverted from the fund.  US Attorney-General Loretta Lynch declined to address speculation that Mr Najib was that recipient.

5. Why are foreign countries like the US involved in the 1MDB probes?

Foreign countries are involved as big sums of money of questionable origins were detected flowing through their financial systems.

An ally of ex-premier Tun Dr Mahathir Mohamad had also gone to some of these countries to lodge complaints related to the missing funds.

As Ms Lynch explained at a press conference on Wednesday (July 20): “The Department of Justice will not allow the American financial system to be used as a conduit for corruption.”

"Corrupt officials around the world should make no mistake that we will be relentless in our efforts to deny them the proceeds of their crimes,” she added.

Singapore too has said it will not tolerate abuse of its banking system by the corrupt.

6. What is the US Kleptocracy Asset Recovery Initiative?

It is a unit within the DoJ set up six years ago to identify and seize assets held by corrupt foreign leaders and their cronies in the United States. The 1MDB case is its biggest so far.

7. What is the Malaysia government’s response?

Mr Najib has denied any wrongdoing in the case. “We have to establish the facts first. This is a civil action, this is not a criminal action. It is limited to the names mentioned in the DoJ report,” he said in response to media queries on Thursday (July 21).

He said those named in the suits, including his stepson Riza,  have the right to legal process in the US.

The Malaysian government says it will cooperate with lawful investigations of local companies or its citizens.