1Malaysia Development Berhad (1MDB), the state-owned fund that forms the crux of a US Department of Justice suit filed recently, says it is neither party to the civil litigation nor has it benefited from the transactions mentioned.

In a statement early on Thursday (July 21), 1MDB also said it has not been contacted by any foreign agency including the US in relation to respective country’s investigations.

The US Justice Department on Wednesday (July 20) moved to seize more than US$1 billion (S$1.3 billion) in assets including luxury real estate and a jet allegedly bought with money pilfered from the 1MDB state investment fund. 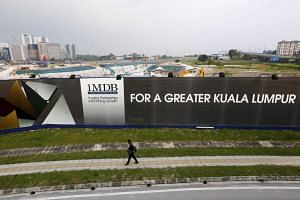 Court filings made thinly veiled references to Malaysian premier Najib Razak himself in the case, as the US alleged that billions of dollars were siphoned off by Najib’s stepson, a family friend and other officials.

Pilfered funds were notably spent on fine art and high-end US real estate, and Najib’s stepson also invested more than US$100 million to finance the 2013 Hollywood financial crime caper The Wolf Of Wall Street, according to the Justice Department.

“1MDB highlights that it is not a party to the civil suit, does not have any assets in the United States of America, nor has it benefited from the various transactions described in the civil suit,” the firm said.

The US Attorney-General held a press conference on Wednesday (July 20) after the justice department filed suit.

“The Department of Justice will not allow the American financial system to be used as a conduit for corruption,” US Attorney General Loretta Lynch said in prepared remarks to announce the new legal action.

The civil-forfeiture complaints filing included details of banking transactions that showed over a billion dollars flowed out of 1MDB and eventually landed in the bank accounts of several named and unnamed individuals tied to the company.