SINGAPORE (BLOOMBERG) - In a private dining room at Singapore's Taste Paradise restaurant, over a meal of abalone and suckling pig, two Goldman Sachs Group bankers were explaining a US$1.75 billion (S$2.4 billion) bond offering to six executives of a Swiss bank.

It was early 2012, and joining Goldman bankers Roger Ng and Tim Leissner that day were a young Malaysian financier named Low Taek Jho and an official from state investment fund 1Malaysia Development Berhad, known as 1MDB, which had hired the New York bank to underwrite the bond sale.

Now, people familiar with the matter say, investigators from Singapore to the United States are looking more closely at the roles of Mr Ng and Mr Leissner, who have both left Goldman. And they're asking what happened in that private dining room named after the first emperor of a unified China, Qin Shi Huang.

In particular, they're examining how US$577 million in proceeds from a bond sale that May ended up a day later in an account at BSI SA in Switzerland - the same bank whose executives were at the Taste Paradise.

The lunch, previously unreported, brought together the key parties in what has become the biggest financial scandal in Malaysia's history, involving the alleged misappropriation of US$4.5 billion of 1MDB funds. It was the culmination of numerous conversations as BSI bankers and compliance officials sought clarity on the deal.

The BSI account belonged to a British Virgin Islands entity known as Aabar Investments PJS Ltd., which US court documents say was used to siphon off about US$1.4 billion from two 2012 bond sales, including the offering discussed at the lunch.

Mr Leissner, Goldman's former chairman of South-east Asia and lead banker for three 1MDB bond sales, is now barred from the world of finance in Singapore and the US.

Prosecutors in Malaysia and Singapore are turning their attention to Mr Ng, Mr Leissner's junior, who introduced several parties central to the scandal, the people said. Malaysian authorities are said to be preparing a warrant for Mr Ng's arrest, people familiar with the matter said earlier this month.

Mr Ng couldn't be reached for comment. A lawyer for Mr Leissner, Mr Marc Harris, declined to comment, as did Mr Edward Naylor, a Hong Kong-based spokesman for Goldman Sachs, and an official at EFG International AG, which acquired BSI in 2016. A representative for Mr Low did not reply to emails.

The 1MDB investigation has quickened since Malaysian Prime Minister Mahathir Mohamad returned to power in May. Tun Dr Mahathir has called former premier Najib Razak, who set up the fund in 2009, a thief and made resolving the case one of his priorities. Several arrest warrants - including one for Mr Low, described by prosecutors as a key figure in the plot - have already been issued.

Dr Mahathir said in a June 22 Bloomberg Television interview that Malaysia is also seeking to recoup some of the almost US$600 million in fees Goldman made from the three deals, which were arranged by the bank's London-based unit. 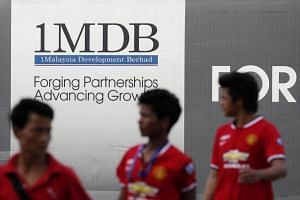 "What we earned from the debt transactions reflected the risks we assumed at the time, specifically movement in credit spreads tied to the specific bonds, hedging costs and underlying market conditions," Mr Naylor, the Goldman spokesman, said last week in response to Dr Mahathir's comments.

Mr Ng, a well-connected Malaysian banker, joined Goldman in 2005 from Deutsche Bank AG, where he won mandates for several bond deals. He provided an introduction to lawmakers in the state of Terengganu, which in 2009 hired Goldman to advise it on the creation of the Terengganu Investment Authority (TIA), the people said.

Mr Ng was promoted to managing director that year. At TIA, which eventually became 1MDB, Mr Ng crossed paths with Mr Low, a Malaysian dealmaker and adviser to the fund.

As Goldman won deals from 1MDB, Mr Ng and Mr Leissner forged a friendship, which extended to their wives, according to the people. Investigators are now also looking at a transfer shortly after the May 2012 bond sale of US$17.5 million to Mr Ng's wife, Malaysian lawyer Lim Hwee Bin, from Mr Leissner's former wife Judy Chan, who runs a vineyard in China, the people said. Ms Lim and Ms Chan did not reply to emails and phone calls.

Mr Ng is described by those who know him as the antithesis of a Wall Street investment banker - genteel, valuing personal ties and averse to asking hard questions. He was content letting his boss champion the 1MDB deals. Mr Leissner, who arrived late at the 2012 lunch and left early to catch a flight, made most of the presentation, leaving Mr Ng and Mr Low to fill in the gaps, according to the people familiar with the meeting.

While Mr Ng played an important role facilitating the US$1.75 billion bond deal, dubbed Project Magnolia, he wasn't involved in the two other bonds Goldman underwrote for 1MDB, the people said. Mr Ng left the bank in 2014, a few months before the missing 1MDB funds became public.

Now managing director for Asia at energy-drinks company Celsius Holdings Inc, where Mr Leissner and his current wife Kimora Lee are both investors, Mr Ng has been barred from travelling by the Malaysian Anti-Corruption Commission, the people said.

He and his wife live in a gated community in Damansara Heights in Kuala Lumpur, where houses sell for RM5 million (S$1.7 million) to RM25 million.

Ms Megan Bell, a spokesman for Celsius, declined to comment.