Tun Mahathir, 93, arrives in New York on Tuesday (Sept 25) for a working visit to the 73rd session of the United Nations General Assembly.

He will deliver Malaysia's national statement during the assembly's general debate on Friday.

It's been nearly 15 years to the day since Dr Mahathir last spoke at the UN general assembly - on Sept 25, 2003, about a month before he retired as Malaysia's fourth prime minister on Oct 31.

He called for a restructuring of the UN, saying that the world had lost its way.

Fifteen years on, Malaysia found itself in a new beginning.

When Dr Mahathir takes to the UN podium on Friday, he will be speaking as Malaysia's seventh prime minister, following Pakatan Harapan's (PH) May 9 general election victory.

Foreign Minister Saifuddin Abdullah, in a media briefing on the visit, said Dr Mahathir would lay out the framework of the PH government's foreign policy in his UN speech.

Datuk Saifuddin said the fundamental principles of Malaysia's foreign policy would be maintained.

Asean would remain the top agenda in the country's foreign relations.

Malaysia will also continue to practise the policy of neutrality and strive for friendly relations with all countries.

In addition, some older foreign policy elements would be revived. These include the Look East Policy and emphasis on Africa.

"But there are at least two elements which are new on the table, which is human rights and sustainable development goals," said Mr Saifuddin.

Another thing that will not change in Dr Mahathir's UN speech this time around will be his habit of criticising what is wrong with the state of international affairs.

It is a trait that endeared him, and by extension Malaysia, to the developing world during his 22 years as the country's fourth PM from 1981 to 2003. 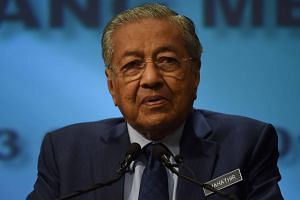 "Rest assured that for some of you who have followed Tun Mahathir's speeches at the UN, he would continue to speak out on world issues such as globalisation," said Mr Saifuddin.

"We don't really want to talk about what happened in the past, but I think what is most important is that the current government wants to have a balanced relation with all countries, which includes the superpowers."

The Prime Minister is scheduled to have bilateral meetings with a number of his counterparts on the sidelines of the UN meeting.

Mr Saifuddin, however, declined to provide more information, saying that the details were still being worked out.

The Prime Minister will have numerous speaking events in New York, aside from his UN engagement.

On Wednesday, Dr Mahathir will take part in a dialogue with members of the US Council on Foreign Relations, a renowned independent think tank.

The dialogue will discuss the domestic situation in Malaysia and relationships with the United States and Asian countries.

The Prime Minister will then take part in a Bloomberg Global Business Forum, on the topic of emerging global trade relationships, later that same day.

The next day, Dr Mahathir will deliver a speech at the Asia Society, entitled, "Insights on How Malaysia will Meet the Challenges Confronting the Security, Prosperity and Sustainability in Asia".

He will deliver the keynote address at the "Achieving Sustainable Development Goals: Unleashing the Potential of Islamic Finance" event held at UN headquarters, also on Thursday.

The event is jointly organised by the Securities Commission of Malaysia, the UN Development Programme and the Islamic Development Bank.

Dr Mahathir will be meeting with a number of renowned entrepreneurs as well as potential investors from the US.

On Friday, he will host a dinner for the Malaysian diaspora in New York and its surrounding areas.

Dr Mahathir will arrive in New York from London, where he is on a working visit from Sept 22.

He departs New York on Saturday for London to continue the second leg of his working visit to Britain from Saturday to Monday.

Mr Saifuddin said many leaders from other countries were looking forward to Dr Mahathir's participation at the UN general assembly and want to meet him.

"He is active, articulate and vocal, so there is a lot of expectation by many UN member states as to what would be the main content of his speech this time," said Mr Saifuddin.