JAKARTA (AFP) - A measles outbreak is feared to have killed about 100 malnourished people in Indonesia's Papua, an official said on Sunday (Jan 21), highlighting a health crisis in the country's eastern-most province.1

A total of 69 toddlers have died in the remote Asmat region, said Papua military spokesman Muhammad Aidi, while reports on the ground suggest 27 people have died in an equally remote and mountainous district named Oksibil.

"We have received reports from villagers that the outbreak is also happening in Oksibil district and our staff have confirmed that, but we still need to check how many people have died," Colonel Aidi told AFP.

"Measles is not dangerous, it's a mild disease. But because those children are malnourished, they can't cope in that condition."

The government and military have sent medical teams and are supplying villagers with medicine, vaccines, medical equipment and nutritious food in Asmat. But the difficult terrain means the team will not arrive in Oksibil until Monday at the earliest, Col Aidi added.

Both areas suffer from a severe shortage of doctors and health facilities as well as poor infrastructure and communications networks, delaying news of the outbreak.

About 129,000 people live in Asmat, a swampy region cris-crossed by rivers that can only be accessed by a flight from Papua's capital Jayapura, followed by a helicopter and boat ride. 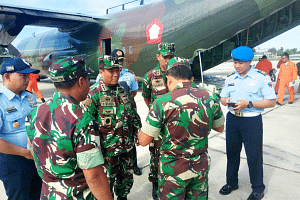 The district of Oksibil has a population of 4,000. To reach some of the villages, people must walk for about a day.

"We have sent aid, now we are making sure that it is actually distributed to those remote villages and not just stocked in a warehouse," said social affairs minister Idrus Marham.

Jakarta proclaimed western Papua to be part of Indonesia after a self-determination referendum in 1969, which some regarded as a sham.

When President Joko Widodo took office in 2014, he vowed to speed up the development in infrastructure in Papua to speed up economic growth.