It is understood that a 3km-long traffic jam occurred at major roads leading to the CIQ complex at the height of the breakdown.

An official at the CIQ said the system broke down, resulting in Customs officers issuing manual receipts for levies collected there.

He said up to 2,500 lorries and trailers used the CIQ route to Singapore daily.

"We have urged lorry operators to use the Second Link to export their goods.

"The levy imposed is just RM50 (S$16) and cheaper at the Second Link compared to the Johor Causeway, which is always congested," he said. 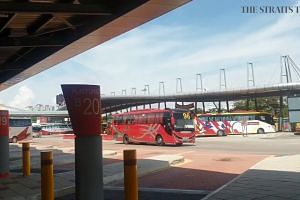 Johor traffic police were deployed there to help with the situation.

A lorry driver, who wished to be known only as Siva, said he was stuck in the jam outside the CIQ complex for at least six hours.

"It was really bad. Usually, massive jams occur only when there is a breakdown in the Customs scanners at the CIQ," he said

He urged the department to put a back-up system in place.

Asked why lorry drivers preferred to use the CIQ when the Second Link was cheaper, he said it was due to the intended locations.

"The goods are to be delivered to Woodlands. Unless the factory is in Jurong, the Second Link is way out," he said.