This was how Foreign Secretary Teodoro Locsin Jr described the almost seven-decade-old Mutual Defence Treaty (MDT) during the joint press conference he held with US Secretary of State Mike Pompeo recently.

As such, Mr Locsin is confident about the assurances given by Mr Pompeo that the United States would come to the Philippines' aid in the South China Sea conflict, and therefore there is no need to review or modify the MDT.

The remarks of the foreign secretary imply that the long-standing US-Philippines alliance remains strong despite the apparent growing influence of China in the Philippines.

Since President Rodrigo Duterte assumed office in 2016, he has put aside the landmark Hague ruling upholding the Philippines' claim over portions of the SCS in exchange for economic grants from Beijing, investments and expanded trade. Many have described this foreign policy as a "policy of appeasement."

During his visit, Mr Pompeo offered a fresh assurance to Filipinos that the US will be ready to defend the Philippines in case of "any armed attack on any Philippine forces, aircraft or public vessels in the South China Sea" in accordance with "mutual defence obligations under Article 4 of our Mutual Defence Treaty."

This was the first open affirmation of American military commitment of support for Philippine sovereignty in the SCS contest. 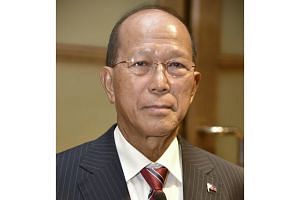 Talks on the cards to review US-Philippine defence pact

US will defend Philippines in South China Sea: Pompeo

The MDT provides that the Philippines and the US will come to each other's aid in case of armed attacks.

Mr Pompeo stressed that China's island-building and military activities in the South China Sea threaten Philippine sovereignty, security and economic livelihood, as well as that of the US.

In the past, there have been concerns and apprehensions about the commitment of the US to defend the Philippines amid the tensions in the region as a result of the belligerent stance of China.

Unlike Mr Locsin, Defence Secretary Delfin Lorenzana is not convinced that the ambiguity and vagueness in the MDT's language will serve as a deterrent to China. He believes such vagueness will only cause confusion and chaos during a crisis.

A few months ago, Mr Lorenzana had directed lawyers from his department to review the MDT, with the objective to either "maintain it, strengthen it or scrap it."

Contrary to the pro-China stance of the Duterte administration, a Social Weather Stations (SWS) survey last year showed that six in 10 Filipinos believe the US will defend the Philippines in case of an invasion by another country.

Moreover, among those aware of the MDT even before the survey, 80 per cent believed the US will defend the Philippines in case of an invasion. Of the 80 per cent, 48 per cent went for "strongly believe," and 32 per cent "somewhat believe."

But the Philippines cannot just rely on the US; it also needs to build up its own capabilities.

"As our only treaty ally, the US remains invaluable to us, and we need to recognise the significance and importance of this alliance," said former foreign secretary Albert del Rosario. "That said, we also need to recognise that we are required to strengthen our own defence and security capabilities."

In South-east Asia, the US has a unique opportunity to enhance cooperation and strategic relations among countries, in a region that has intense interest in curbing the spread of terror and the challenge of radicalisation above and beyond maritime security.

The Philippines can benefit as well from this enhanced framework of international cooperation.

There is, in fact, no real substitute for the support of the US and its allies in this area, making it an especially important window of opportunity for the US to showcase what it can offer South-east Asia to counter-balance China.

Nevertheless, as different countries have different assessments of their internal threats, the US defence approach may need to be more multifaceted if it wants to use defence engagement as a way to get more states to support its continued presence.

The Philippines, for instance, would do well to sustain calls for a rules-based order, and to reach out to allies and Association of South-east Asian Nations (Asean) partners so as to create political and economic structures that best secure their shared future.

The Philippines should attain maritime security by considering the potential benefits of cooperation among the US, Japan, Australia and India. Such cooperation should also extend beyond the four democratic countries, to collaborating with like-minded countries that adhere to the rules-based order.