MANILA (AFP) - Philippine President Rodrigo Duterte fired vice-president and arch-critic Leni Robredo from her post as overseer of his deadly drug war Sunday (Nov 24), an aide said, just days after calling her a "scatterbrain" not to be trusted with state secrets.

Ms Robredo, 54, lasted less than three weeks as head of Mr Duterte's signature anti-narcotics campaign, which she vowed to reform amid allegations police were committing crimes against humanity in killing thousands of drug suspects.

"Essentially, what the vice-president has done is to embarrass our country," he added.

The decision came after Mr Duterte and his political allies publicly criticised Ms Robredo, who had vowed to end "senseless" killing in the drug war after her appointment.

"I do not trust her," Mr Duterte told reporters, calling Ms Robredo a "scatterbrain" who could inadvertently share sensitive security matters with outsiders.

After the public tongue-lashing, Ms Robredo said the president should fire her if she did not have his trust.

Ms Robredo, who was elected separately from the president, surprisingly accepted Mr Duterte's offer of the post despite advisers warning her it was a trap. 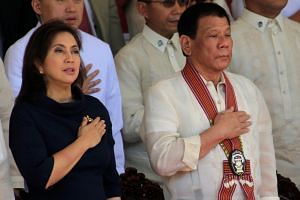 Mr Duterte had previously derided the capability of Ms Robredo to lead the country - which she would have to do if the president dies or cannot function.

The drug war is overwhelmingly backed by Filipinos, but critics allege it is a war on the urban poor with the side effect of unleashing a rush of killings linked to everything from personal disputes to political rivalries.

Police say they have killed just over 5,500 alleged dealers and users who fought back during arrest, but watchdogs say the true toll is at least four times higher.