The Indonesian Military’s (TNI) patchy air safety record worsened when a transport plane crashed into a mountain in Papua on Sunday, killing all 13 people on board, as the public reels from a recent string of deadly accidents involving TNI aircraft.

PAPUA (THE JAKARTA POST/ASIA NEWS NETWORK) - The Indonesian Military’s (TNI) patchy air safety record worsened when a transport plane crashed into a mountain in Papua on Sunday, killing all 13 people on board, as the public reels from a recent string of deadly accidents involving TNI aircraft.

President Joko Widodo promised a review of the country’s aging military fleet last year after another transport plane crashed into a residential area, killing more than 120 people, but calls for safety reform at the TNI remain unheeded.

The ill-fated Hercules C-130 A-1334 was on a dual-purpose mission for navigation training and to carry 13 tons of cement and rice from Timika to Wamena. It is believed that the pilot insisted on landing despite warnings of bad weather and low visibility.

Crews of other aircraft reportedly opted to cancel their landing and return to their airports of origin.

Wamena Airport chief Rasbuhani Umar told The Jakarta Post that a similar aircraft approaching from Sentani Airport in Jayapura had also been scheduled to land at almost the same hour, but had decided to return to Sentani.

“It turned back because visibility at Wamena Airport was only 2 kilometers. However, the Hercules from Timika moved ahead and lost contact at 06:09 a.m.,” Rasbuhani said.

He added that the aircraft had disappeared from air traffic control radar minutes before it was scheduled to land.

Deputy Air Force chief of staff Air Marshal Hadiyan Sumintaatmadja insisted the Hercules had been properly maintained, explaining that it had undergone regular maintenance for every 50 flying hours.

“The aircraft was in prime condition,” he said.

Hadiyan blamed bad weather as the cause of the plane hitting Mount Pugima in the remote area of Jayawijaya. 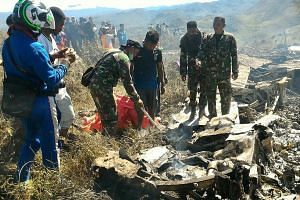 The crashed C-130 heavy lift plane was one of four aircraft Indonesia received from Australia as a grant in 2013 and 2014 based on a memorandum of understanding signed by officials of the two nations in 2012.

With an average 600 flying hours per year upon delivery to Indonesia, the aircraft had a service life of some 30 years left, as they were manufactured in the late 1970s and had only been lightly used.

Sunday’s crash is the seventh fatal accident involving military transport aircraft since 2015, claiming a total of more than 160 military and civilian lives.

On Nov. 24, an Army helicopter crashed into a ravine in North Kalimantan, killing four officers, while another one crashed in Poso, Central Sulawesi, on March 20, killing 13 officers.

The worst accident occurred in mid-2015 when a C-130 crashed into a residential area in Medan, North Sumatra, killing more than 120 people on board and on the ground.

The National Transportation Safety Commission (KNKT), which is in charge of civil aviation accidents, has urged the TNI to participate in the agency’s safety flying program in Papua.

KNKT chairman Soerjanto Tjahjono said unpredictable weather in Papua should no longer be a recurring cause of aviation accidents, because pilots, both civil and military, could be trained to deal with the challenging weather and topography in mountainous Papua.

“So far, no TNI representatives have been keen to join the program. Flying in Papua requires special techniques,” Soerjanto said.

The program aims to improve coordination and the exchange of information between airlines operating in Papua and local authorities.

During the program, the KNKT has found problems revolving around unpredictable clouds and has briefed airlines and pilots on how to overcome them.

The agency had also identified technical problems related to radar, time slots, communication systems as well as weather-monitoring infrastructure and had asked the relevant authorities to address them, Soerjantono said.