In his commentary, the writer says that citizens living in Metro Manila should be more worried about daily air pollution than the ash from the recently erupted volcano Taal.

Face masks ran out quickly, and soon a black market emerged, especially for the N95 type.

People began to fret: How long was the ash flow going to continue, and how dangerous was the ash? Was Taal going to erupt again any time soon?

Over at UP Diliman, the College of Science contacted me early Monday morning asking to organise a press conference to, well, clear up the air, meaning deal with misconceptions.

Dr Giovanni Tapang, the College of Science dean, is a firm believer in public science, as is Dr Lemnuel Aragones, director of the Institute of Environmental Science and Meteorology (IESM).

Speakers were Dr Mario Aurelio, director of the National Institute of Geological Sciences, and from the IESM, Dr Gerry Bagtasa and Jamaica Pangasinan.

I played my role as chancellor by welcoming them, then wore my other hat as a media person, taking notes.

Here is some important information from that press conference, supplemented by some research I dug up:

There were no warning signs that Taal was going to erupt.

These signs would have been: a warming of Taal lake waters, fishkill and the odour of sulphur. 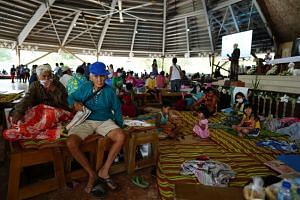 Taal has been on Alert 1 level since March last year, but the situation seemed stable until Sunday afternoon, with some seismic activity (volcanic earthquakes) detected, leading to a level 2 alert.

Taal erupted Monday at around 3 am, when an alert level 4 was raised. There is still a possibility that level 5 could be raised, meaning an even stronger eruption, but there is no way of telling if and when this will happen.

The Sunday eruption resulted in a huge plume reaching as high as 30 kilometres at one point. When the press conference was held, the plume was about 12.5 kilometres high.

In sharing this information, Dr Bagtasa's main point was that much of the fine ash was up there in the atmosphere, and that the plume was moving in a northeast direction, toward the Pacific and Okinawa.

The panic comes from the ash that ended up on our rooftops and vehicle windshields, but Dr Bagtasa pointed out these range from 50 to 170 µm (micrometers), tiny but still too large to be inhaled (please don't try).

For purposes of comparison, the diameter of hair is about 50 micrometers.

We should be more concerned about fine particulate matter; the one from Taal is mostly high up in the atmosphere.

In fact, UP Diliman's monitoring of air quality in Quezon City showed levels that were actually good on Monday, at about 10 µg/m3 (micrograms per cubic meter), below the World Health Organisation's unsafe threshold of 25 µg/m3.

Dr Bagtasa said that on Sunday night, the levels did reach 60, but had gone down after.

The WHO threshold, added Dr Bagtasa , is equivalent to one stick of a cigarette. The fireworks on New Year's eve, on the other hand, pushed air pollution levels to as high as 200 µ/m3!

In terms of hazards, the area around Taal and the southern Tagalog provinces do face the greatest risks in terms of pollution, and residents would do well to take precautions, especially in the case of children, the elderly and those with chronic conditions like asthma, bronchitis and emphysema.

But for Metro Manila, we should be more worried about the daily air pollution we get from vehicular emissions, industrial pollution, and even people smoking cigarettes.

Oh, and I was reminded by Dr Bagtasa that one effective natural protection against polluting particulate material is the hair inside our nose - so don't trim it!

Dr Bagtasa has been providing us with valuable information on monsoon rains and typhoons, especially when we hold our commencement exercises in June, right at the start of the typhoon season.

I hope his work and that of the IESM can guide our mayors and governors before they suspend classes in the aftermath of the Taal eruption.

Dr Bagtasa said there was no need to suspend classes and work in Metro Manila.

The writer is columnist with the paper. The Philippine Daily Inquirer is a member of The Straits Times media partner Asia News Network, an alliance of 24 news media entities.