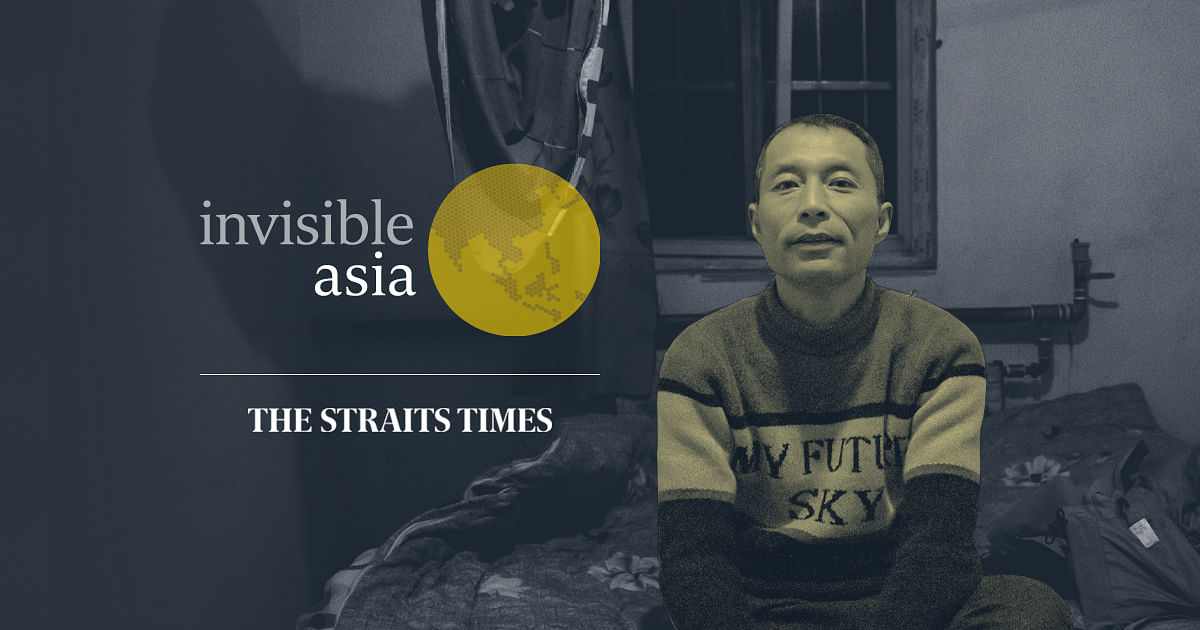 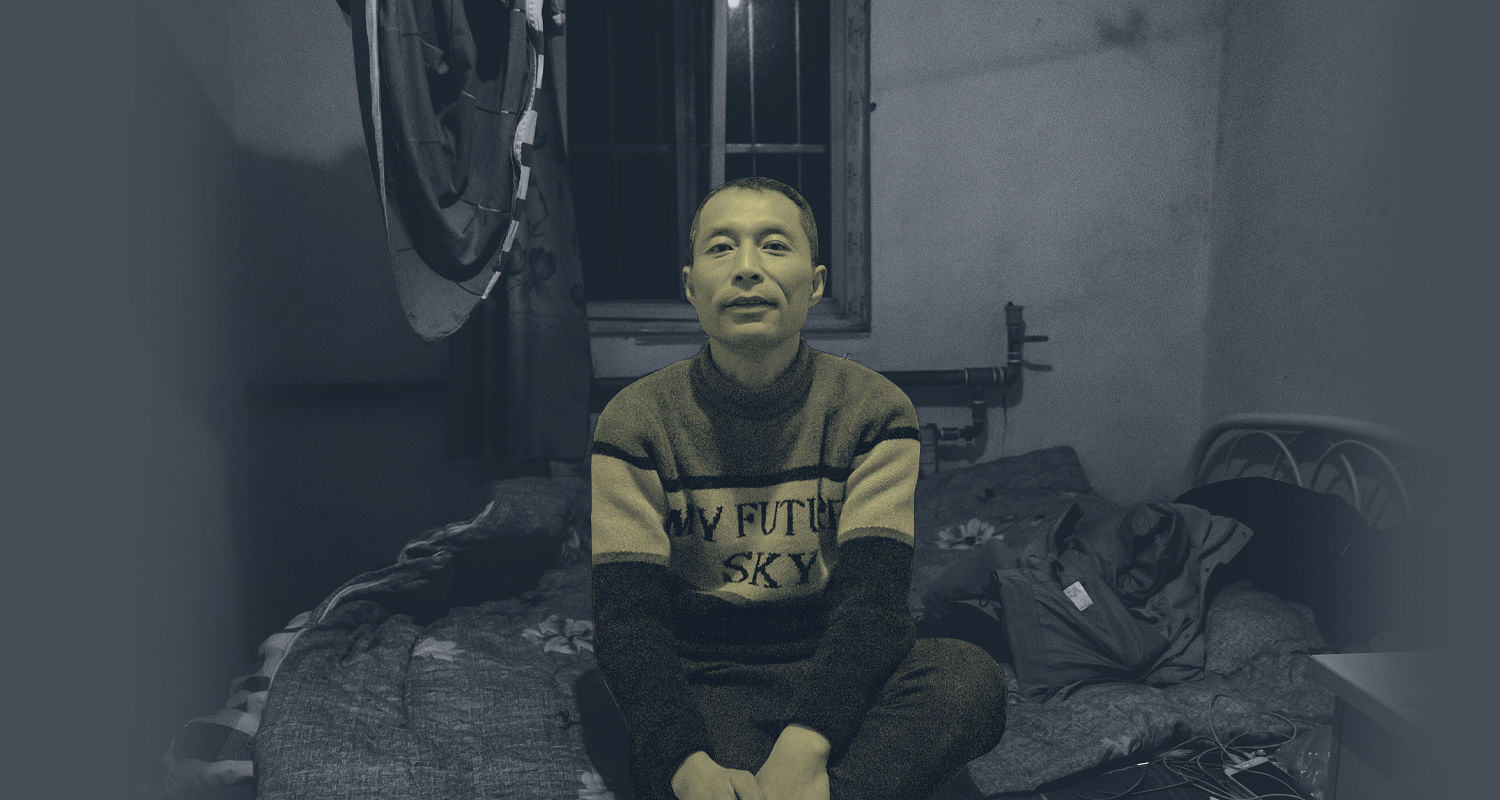 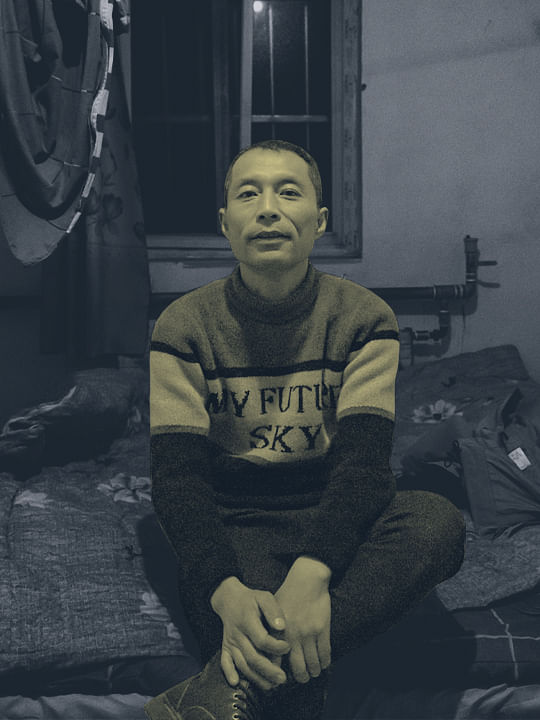 This is part of a weekly series of feature stories, videos and podcasts in which The Straits Times correspondents cast the spotlight on people and communities around the region, living in the shadows of their societies where they exist largely unseen, unheard and little talked about.

BEIJING – On some days, migrant worker Wei Xiaoqiang collapses into bed after getting home from work and falls asleep with his shoes still on, the day’s grime still on his face.

“I just wrap myself in a blanket and go to sleep,” said the 43-year-old from China’s northern Jilin province.

His reality now is a long way from the big dreams he left behind: As a boy, he aspired to be a journalist or a designer.

Mr Wei came to Beijing about half a year ago to find work, and has sorted parcels, loaded and driven logistics trucks, and worked in construction sites and factories.

There have been winter days when he worked until his perspiration hung like “frost on his jacket”.

When Mr Wei spoke to The Straits Times, he was working in a car factory where he was responsible for moving parts between different areas.

It is menial work, and like many of the migrant workers who end up in the Chinese capital, he finds these jobs at the Majuqiao labour market on the outskirts of the city.

There, employment agencies and recruiters line the street, shouting out job offerings or advertising them through posters, offering work that pays anywhere from 160 yuan (S$33) to 320 yuan a day.

It’s a lonely – incredibly lonely – lifestyle. In Beijing, you have no one to rely on. Your friends are always busy.
- Mr Wei

These jobs are odd bits and bobs that the city requires to function – from sorting and loading parcels during China’s e-commerce festivals, to positions for temporary security guards and cleaners during the Chinese New Year holiday when many migrants go home.

The work is often informal and uncontracted, which experts say leaves these workers vulnerable to being exploited.

While there are no official figures on how many of China’s over 290 million rural migrants work under such conditions, Chinese Premier Li Keqiang said last week that there are 200 million Chinese workers under flexible employment.

Experts say a growing number are being drawn into informal work like these as they move to the cities seeking a better life.

These workers, mostly men between the ages of 20 and 40, fall above China’s poverty line – and so might not qualify for support under China’s anti-poverty drive – but unlike migrants with stable work, they live a hardscrabble life, seeking new jobs by the day to stay afloat.

Some workers say they enjoy the freedom of not being tied to fixed working arrangements. Others like Mr Wei confess they simply cannot find any other work.

“I want to do something different, maybe be a supervisor in some company. Who wants to do work like this? But I don’t have the qualifications, so these are all empty dreams,” he told The Straits Times.

In Majuqiao, he looks out for work that pays about 200 yuan a day. There are higher-paying jobs but those are more physically demanding, he says. A typical workday is between eight and 12 hours long.

“Bosses think that since they are paying more, they want us to work harder... If we can’t keep up, they might withhold our pay.

I want to do something different... Who wants to do work like this? But I don’t have the qualifications, so these are all empty dreams.
- Mr Wei XiaoqiAng

“Sometimes, when I return home from work, I am just so tired. Not just physically tired, but also in my heart.”

Some employers would scold workers for drinking too much water and needing to use the toilet, and some would withhold wages if workers did not perform up to their expectations, he said.

Working five to six days a week, Mr Wei makes about 5,000 yuan a month – more than the 1,500 yuan he would have made back home doing the same odd jobs.

“It’s a lonely – incredibly lonely – lifestyle. In Beijing, you have no one to rely on. Your friends are always busy. We all go out early and come home late. We don’t get to meet. It’s a very lonely life,” said Mr Wei.

“I am getting older… Most people my age should strive to have a stable income and stop living such an uncertain life... I can only live by the day and hope my luck stays good.”

His home city of Liaoyuan used to be a coal-producing hub before the mines were depleted in the 1990s.

He dropped out of middle school to work and for almost 20 years, has been labouring in cities across China.

Bottom of the food chain

In Beijing, Majuqiao is a magnet for migrants from China’s north-east provinces like Mr Wei.

Such job markets are present in most cities – like the Sanhe job market in the manufacturing hub of Shenzhen, which made headlines a few years ago for gig workers there who lived a subsistence lifestyle romanticised as “work for one day and party for three”.

Mr Geoffrey Crothall, a spokesman for Hong Kong-based labour rights group China Labour Bulletin, said: “This casualisation of labour and the precarious nature of this labour, it’s not just an issue confined to major cities, it’s an issue you find in cities across the country.”

He added that these workers are not protected by legal contracts and live at risk of wage arrears. Their employers also do not make social security contributions for them, and they are unlikely to be covered by accident insurance.

“If they are working as day labourers, then they are very much at the bottom of the food chain.”

The migrant workforce is extremely vulnerable to such crises as the pandemic, exactly because their skills do not allow them to adapt quickly.
- Mr Huang Tianlei
Research fellow at the Peterson Institute for International Economics

This trend towards short-term employment was flagged as early as 2012 in a Tsinghua University study that highlighted how a new generation of migrant workers were changing jobs more frequently, attributing it partly to poor pay and work conditions.

The proportion of rural migrant workers employed under formal contracts has also declined over the years, from 42.8 per cent in 2009 to 35.1 per cent in 2016 – the latest year that the National Bureau of Statistics released figures on this.

Invisible Asia: Who are the people who exist largely unseen, unheard

The plight of Mr Wei and other workers like him often goes unseen, but experts say it highlights a keen crisis that China faces – where millions of unskilled workers have flocked to cities for work as rural conditions decline, but find themselves able to do only the most basic work.

Unequipped to tap the opportunities offered in these urban areas, these mostly male workers remain trapped on the bottom rungs of the social ladder.

Mr Huang Tianlei, a research fellow at the Peterson Institute for International Economics, pointed out that this structural mismatch is expected to accelerate – demand for low-skilled labour will fall as a result of automation and other reasons, and structural unemployment could increase in future.

“The migrant workforce is extremely vulnerable to such crises as the pandemic, exactly because their skills do not allow them to adapt quickly,” said Mr Huang.

The central government recognises the scale of the problem and has made revitalising rural areas a key focus.

Beijing’s first policy document of the year, released last month, outlined the importance of developing rural industries so that rural workers can find work “close to, or wherever they are”, and improve the quality of rural education.

But it is an enormous challenge. The rural education system would have to be overhauled, said Mr Huang, adding that schools would have to teach rural students skills to be able to continuously learn to equip themselves to do future jobs.

“The rural youth will become the majority of China’s labour force tomorrow and, though improving, the education system is still not up to the task of educating this future labour force to be capable of adapting to the evolving demands of the labour market,” he said.

At the same time, Beijing will have to find ways to upgrade the skills of the hundreds of millions of workers like Mr Wei.

Failure to do that could lead to rising anger among workers who feel they have been left behind, which could lead to instability, said Mr Crothall.

Mr Wei, however, is not waiting for help to come his way. He recently bought a second-hand laptop and has been learning basic design skills online, to finally take a shot at his childhood dream.

Quoting a Chinese proverb, he said: “Even the murky Yellow River has days when it runs clear. My luck will eventually change.”

How to end the annual mass migration of Chinese workers