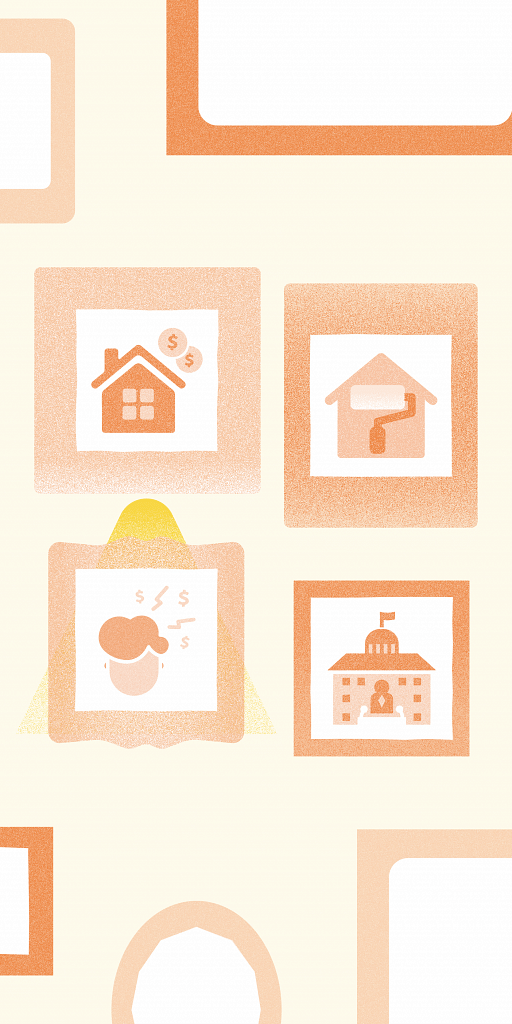 Their first wedding anniversary was on May 11, 2019. Neha Sharma (name changed on request) and her husband Rajneesh (also not his real name), both of whom love travelling, wanted a holiday together. Instead, the couple found themselves alone at home, celebrating with just a simple cake.

Just a month before the anniversary the young couple had moved into a two-bedroom flat of their own in a Delhi suburb and were saddled with a home loan of 4 million rupees (S$72,000).

"I did regret it," 32-year-old Ms Sharma said, referring to how they missed out on their anniversary festivities, "but we just had to get a hang of our expenses." They continue to fork out a monthly mortgage payment of 36,000 rupees on a joint income of around 150,000 every month, which she described as a "huge bummer".

"The salary would come into our accounts and by the 10th of every month we would literally be scraping the bottom of our bank balances. We just didn't know what to do," she told The Straits Times, detailing a host of lifestyle changes the couple made to stick with their dream of owning a home.

Giving up travelling or shopping for items such as clothes or shoes for nearly as long as a year was one. Eating outside - something they did practically every weekend - no longer was affordable. . "We stopped eating out entirely for the first three months," she added. "We would eat home-cooked meals whenever possible or eat at the office cafeteria."

The Sharmas are among many millennials in Asia living with immense financial burden and, along with it the mental stress, to squeeze themselves in through the door to own a home.

Saving on rent, the stability of owning a home and the prospect of a windfall from appreciating property prices are strong lures but buying a house is not for the faint-hearted with today's unaffordable home prices.

A December 2019 Asian Development Bank study found that the average housing price-to-income ratio across 211 cities in 27 developing Asian countries was 15.8. This was classified as "severely unaffordable", compared to a ratio of around four in developed countries.

Choosing to buy a house comes inevitably with the strain of paying off long-term loans and, in many cases, the guilt of borrowing from their parents, many of whom could be ageing and retired.

According to the Deloitte Global 2021 Millennial and Gen Z Survey, as many as 46 per cent of millennials said they were stressed about their long-term financial future. This number was higher for India - 51 per cent.

Like the Sharmas, Mr Krit Raksajit and his sister also had to jump through several hoops when they bought a three-storey 150 sq m house about six years ago on the outskirts of Bangkok, the Thai capital.

Each would not have been able to do so on their own. "I think it's because we both are making the payments that we can afford to buy a house," said Mr Krit, a 27-year-old travel coordinator with a software firm in Bangkok, adding that he and his sister had no furniture for the first couple of years.

"We didn't have a couch, or chairs or a dining table. Just a mattress," Mr Krit said, adding that overseas trips were also out of the question. The first thing Mr Krit bought when he could afford it a few years ago was a refrigerator. "Before this whenever we wanted cold water we had to go to the convenience store nearby," he said.

Lack of affordable housing has forced many to choose to rent.

More On This Topic
Interactive: How has the design of HDB homes in Singapore changed over the years?
A house for the millennial: Telework means not being confined to city life

In Beijing, training curriculum developer Sun Yi has no plans to buy a home with her husband. The 31-year-old said she did not want to bear the burden of home loans.

"The high housing prices in Beijing is one factor, but I just don't see the point in having the additional stress of paying off loans," she said. "I'm okay to rent for life."

In New Zealand, stratospheric housing prices have forced prospective first-time buyers to scout dating platform Tinder for a match that might help in acquiring a property.

Data provided by Tinder to Stuff, a Kiwi news website, found the number of users stating in their profile that they were looking for a partner to buy a house had more than doubled, jumping 2.6 times year-on-year from June 2020 and June 2021.

The economic uncertainty amid the pandemic has further exacerbated concerns among millennials. Only 36 per cent of those in the Deloitte survey expected their personal financial situation to improve in the coming year.

The Sharmas were also worried about their jobs. "We were really scared," Ms Sharma said, adding they did not want to further burden their parents who had lent them money to make the down payment on their house.

The couple remember putting on a brave face when friends asked about the housewarming party. "We were not that excited, I will be very honest, because we were already financially stressed," said Ms Sharma. "Obviously we couldn't say no because we had shared with them the biggest news yet of our life."

While the couple are now better at managing their finances, she said the strains, at times, have spilled into the marital relationship. "I would stress out very easily and rattle off nonsense but I think we pulled through all this because my husband has been very careful about budgeting."

The Sharmas still have another 12 years before repaying their loan. "I agree owning a home is an asset," she told ST, "but there are lots of cons with the pros." "The stress I have now is that we need to close the home loan as soon as we can so that we save on paying interest," she said.

Yet, the Sharmas are the lucky few among more than 400 million millennials in India, the vast majority of whom have found themselves locked out of the housing market.

Mr Vivan Marwaha, the author of a recent book 'What Millennials Want', blamed this largely on the galloping cost of living, an absence of enough stable and high-paying jobs and the lack of affordable housing.

"The only people buying homes (in India) are those who have some ancestral inherited wealth or are among the limited five per cent or so who work for the Googles of the world and have other high-paying jobs," he told ST. "For all others, it is completely outside of the realm of possibility."