In his article, the writer commends Ms Megawati Soekarnoputri, chief of ruling party Indonesian Democratic Party of Struggle (PDI-P), for her food diplomacy and for soothing Gerindra chair Prabowo Subianto with her nasi goreng (fried rice).

JAKARTA (THE JAKARTA POST/ASIA NEWS NETWORK) - There is nothing new about the impact food has on politics. In the old days, many kings practised food diplomacy in entertaining their guests; from serving the best wine to producing unique dishes that could have been created only by the royal house's finest chefs.

The tradition continues in the modern political world. Many leaders of political parties and presidents use food diplomacy to strengthen relationships between allies or diffuse tension with the opposition.

Megawati Soekarnoputri, the chairperson of the Indonesian Democratic Party of Struggle (PDI-P), is no exception.

She appreciates the notion of food diplomacy. Certainly she learned from her father, the country's first president and often called a great leader of the Indonesian revolution. In her teens, Megawati was often tasked by Sukarno to entertain royal guests.

I believe the former president is well trained in this skill, and from there she incidentally learned about politics. Her dish of choice is nasi goreng (fried rice).

You can add eggs, shreds of chicken or a combination of other toppings such as anchovies, shrimp chips, beef jerky and sometimes tempeh or slices of beef steak.

But make no mistake, the best fried rice is home-made, prepared with love. The seasonings' balance is very much affected by the cook's feelings.

We can understand the relationship between feelings and food from James T. Siegel, a famous anthropologist who wrote The Rope of God, a classic book on the Acehnese rebellion under Darul Islam in the 1950s.

He returned to Aceh for a sojourn some years after the tsunami of Dec. 26, 2004, devastated the province. He went from house to house in various villages and tasted the cooking of Acehnese homemakers, straight from their kitchens. Siegel is indeed very familiar with Aceh and its cuisine.

After enjoying platefuls of Acehnese food from various kitchens, Siegel concluded the Acehnese had recovered from the tsunami.

Siegel's student, anthropologist Reza Idria, told me sometime ago that Siegel had said the harmony of Acehnese cooking was back, that it tasted as delicious as it used to be, which meant the mental state of the women, who form the centre of family life, was back to normal, and thus reflected the state of society.

Borrowing from Siegel, Megawati's fried rice may also reflect her mood. She is the leader of a large political party that passed the test of history during the political turbulence of the early years of reform.

The meeting featuring her signature dish probably reflected the mixture of the powerful interests surrounding her, or at least the twists in the political dynamics.

Nevertheless, we should also acknowledge Megawati's own ability in terms of keeping calm in various situations. At least she never brings her emotion to light. She prefers to stay quiet, yet her decisions often take her opponents by surprise.

Once toward the end of the Old Order, Sukarno hosted student activists that often protested his policies. Sukarno welcomed them warmly at the Merdeka Palace, because to him the student activists were his children, children of the nation.

It was daytime, and Sukarno saw fatigue on the activists' faces, perhaps from hunger. He then asked Megawati, his then-teenage daughter, to cook fried rice for lunch for the fierce protesters.

As she was ordered by her father, Bung Karno, Megawati could not refuse. She was undoubtedly unhappy. "To be honest I wasn't very willing. I carried out the request half-heartedly, because I was upset. Why should I cook fried rice for the people who protested and insulted my father," Megawati said, more or less, as once conveyed to the pro-democracy student activists who met her in the 1990s.

I quote that story from a fellow senior journalist's blog.

Megawati, he said, cooked the fried rice in tears. Strangely enough, the fried rice, according to the protesters, tasted very delicious.

It's not clear whether they were hungry, or whether indeed Megawati was capable of holding her emotions so that her fried rice remained excellent.

Again we recently witnessed Mbak Mega, as she is known, in action with her food diplomacy.

Her guest this time was Gerindra chair Prabowo Subianto, who contested Megawati's candidate, Joko "Jokowi" Widodo, in the presidential election. 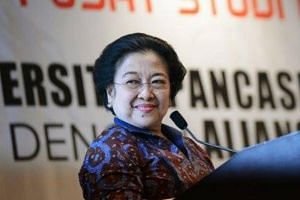 Prabowo was treated with fried rice, made specially by Megawati, which according to Hasto Kristiyanto, the PDI-P's secretary-general, was made from the finest ingredients. "Even the shallots were handpicked by Megawati herself," said Hasto.

Whether we like it or not, Megawati is still Indonesia's most influential political queen, who determines the result of power plays. For those hoping for a cooler post-election atmosphere, the outcome of the lunch seemed quite soothing.

Prabowo said he liked the fried rice so much that Megawati jokingly reminded him to watch his diet. President Jokowi's ruling coalition and Cabinet, however, remain far from crystal clear - reports say Gerindra is not welcome in the ruling coalition.

It seems the coalition of the next Jokowi administration will regroup and involve old and new friends. I figure it may have happened with or without the fried rice.

The writer is the chief editor of The Jakarta Post. The Jakarta Post is a member of The Straits Times media partner Asia News Network, an alliance of 24 news media organisations.