After Zhang Wei turned 25, his parents in a small village in China’s eastern Anhui province came up with a plan to help him escape the fate that had befallen other men in their 200-strong community - a life of lonely bachelorhood.

In March, they urged him to go for a matchmaking session in the southern Guangxi province’s Beihai city, 1,800 kilmeters away. They also forked out some 100,000 yuan (S$21,700) so he could return home to Zhang Gang village, about an hour’s drive from Anhui’s capital city of Hefei, with a wife.

On May 7, after the couple had lived together for 50 days, the new wife went missing. She left the Zhangs in debt and her husband with a broken heart. 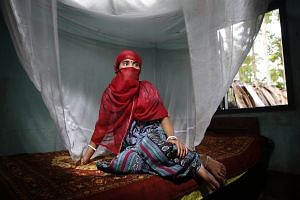 When everyone wants a boy child

They knew her only as Xiao Hong, never learning her full name, her identification number or her real age, although she claimed to be in her late 20s.

“I may look unaffected and quite jovial on the outside, but deep inside, I do feel sad and miserable because I had developed real feelings for her.

“I was serious in this relationship but she cheated me and played me like a fool,” Mr Zhang, now 26, told The Straits Times.

His tale is one that plays out regularly across villages in China. Anxious parents shell out huge sums to secure wives for their bachelor-sons only to fall victim to a marriage fraud scam, often involving a foreign bride.

In the Longyan city of the southern Fujian province, some 2,000 Vietnamese women have married local men in a four-year span since 2009. Some 25 per cent of these women have run away, according to reports.

In China’s 1.37 billion people, men outnumber women by 34 million, which is about the population of Canada.

The abundance of men - stemming from a confluence of China’s one-child policy and its traditional preference for boys – has intensified the competition for women and narrowed the marriage prospects of low-educated and low-income men living in the villages.

Buying brides is a risky path for the rural men but still their best shot at escaping a life of bachelorhood.

This was more or less why Mr Zhang decided to take his parents’ advice to go on the match-making trip to Guangxi, with help from his aunt.

He has had around five girlfriends since he turned 20 and believed he would be able to find a wife on his own. But he agreed to the matchmaking as it seemed less troublesome and more cost-effective.

His last girlfriend who refused to move into or near his village made him realise that it would be a challenge.
And even if he found a willing bride, the rising cost of a wedding - which can total about 700,000 yuan, including the purchase of a house - was another insurmountable challenge.

“The amount is too high and my family can’t afford it. So we thought it is cheaper to spend 100,000 to get a wife without having to buy a new house,” he said.

It wasn’t love at first sight and Xiao Hong wasn’t his first choice among the pool of women he met in Beihai in March. The matchmaker told him that Xiao Hong was more suitable for him instead of his first pick, who appeared less assertive and gentler.

Mr Zhang eventually fell in love with Xiao Hong. It helped that she was respectful towards his parents and helped out with household chores and at the family’s strawberry farm.

Their time together gave Mr Zhang a glimpse of an enjoyable future. “I thought I had finally settled down and could start a family to begin a peaceful life. My parents could take care of our children while we built our career,” he added.

The neighbours soon grew impressed with Xiao Hong. Through her, four other families got brides for their sons through the same route, with each paying 100,000 yuan too. Like the Zhangs, they knew little about the women who were introduced as Xiao Hong’s sisters or cousins.

Bliss spread in the village as the families held weddings and rejoiced that their sons had found wives. Mr Zhang’s family was especially elated as Xiao Hong said she was pregnant.

But their joy vanished when Xiao Hong and the four other brides fled on May 7, under the pretense of going for an outing. The women took along with them jewellery, cash, electronic appliances and even motorcycles from the families they had married into.

The families now feel they have become the laughing stocks of Zhang Gang. The “husbands” left the village almost immediately, too ashamed to be seen by the neighbours. Neighbourly relations too have come under strain, some families blame the Zhangs and seek compensation from them.

Looking back, Mr Zhang said he realised there were warning signs that he had entered into a marriage scam, such as when he was urged to pick Xiao Hong.

“They might have worried that the other girl would not be wily enough to carry out the scam,” he said.

His life is in limbo, the police have instructed him to stay close to home to assist in investigations. Mr Zhang cannot return to Shanghai and has had to find a job in Hefei city.

But he still has his hopes.

“I have not lost hope on marriage. Life continues. I’m still young anyway and I still have time on my side. I’ve not lost hope in women too. I consider it as just an unfortunate incident.”

And despite what she had done to him and his family, he says he is still in love with Xiao Hong.

“Yes. There's still some love for her. If she were to appear before me now, I couldn't bear to scold or blame her. I still love her. After all, I did develop true feelings for her,” he said.